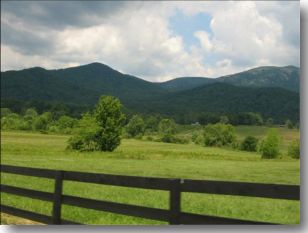 There is a lot of conflicting information about George Cheek, Sr., and his children.  Some sources indicate that he was born in 1722 and had 11 or 12 children, whose birth dates range from the 1740's to the 1790's.  But as best as I can determine, George Cheek, Sr., was probably born somewhere between 1735 and 1745, and his children were probably born between the 1760's and 1780's.  The researcher Eula Marie Holtze Brown, whose book Parks Family History: Ancestors and Descendants of George Washington Parks contains the most comprehensive published account of George Cheek, Sr., concluded that he was born about 1738.  It's possible that less careful researchers pushed George's birthdate back to 1822 because his son Nicholas's widow, Barbara, claimed to be 104 years old in 1858.  (See Cotton's Keepsake of Poems of Various Subjects

During the late 1790's, George Cheek and at least some of his family left Virginia and moved to the territory of Indiana, settling on the Ohio River in an area that later became Dearborn County.  According to History of Dearborn County, Indiana (1915), p.155, the brothers Nicholas Cheek and Tavner Cheek arrived in 1794 or 1796.  Nicholas' widow Barbara Cheek claimed that she and her husband were the fourth family to settle in the township (in 1794) after George Groves, Benjamin Walker and Ephraim Morrison.  However, "Tavern [Tavner] Cheek, a brother of Nicholas, gave the year of their coming as 1796, which is very probable."  This source also states that Tavner Cheek and Nicholas Cheek were brothers of Francis Cheek and Page Cheek of Dearborn County.

The evidence of the Cheek family's connection to Front Royal, Virginia, comes from a Revolutionary War pension application filed in 1833 by Isaac WAY of Ripley County, IN.  (NARA File No. S16568).  George Cheek of Dearborn County, IN, provided a supporting declaration.   This was probably George Cheek, Jr., not George Cheek, Sr., who does not appear in the 1820 or 1830 census and may have been deceased by 1833.  The applicant Isaac Way states that he enlisted in the army in Front Royal, Virginia, in 1780 when he was about 18 years old.  His friend, George Cheek states that he was acquainted with Isaac Way during the Revolutionary War.

The origins of George Cheek, Sr., are a mystery and there is no record of him before he appears in the court records of Frederick County, VA, in the 1760's.  There is no evidence that he was related to the Cheek and Chick families of Tidewater Virginia, who are believed to be descendants of John Cheek of Old Rappahannock Co., VA.  Recently, a descendant of James Cheek (b. abt. 1788) of Decatur County, IN, who may have been a grandson of George Cheek, Jr., of Dearborn County, had a DNA test through the Cheek/Chick DNA Project.  His results did not match the descendants of John Cheek of "Old Rapp."  Moreover, it turned out that his DNA "haplogroup" is "E3b" which is fairly rare in northern Europeans.  Although E3b is occasionally found in people from the British Isles, Germany, and Austria, it's more common in the Mediterranean region, especially the Balkans.  We are currently seeking more descendants of George Cheek for the DNA study.  If you are a direct male-line descendant of George Cheek, click here for more information!

Mar. 1, 1767. James COLLINSWORTH to George CHEEK, 143 acres in Culpeper Co., part of a 400 acre parcel surveyed for COLLINSWORTH on Sept. 27, 1762, on south side of the Blue Ridge and north side of Lands Run in the fork of the Indian River.

Geographical note: The Berkeley District was created in 1772 from the northern part Frederick Co., VA.  It's now in West Virginia.