ecklenburg County, North Carolina, was established in 1763 from the western part of Anson County.  For many years, the location of the state line between Mecklenburg County and South Carolina was uncertain due to the existence of the Catawba Indian Reservation

.  The boundary was finally settled by agreement of the two states in 1813.  Before then, settlers in the Indian lands might appear in the records of either North Carolina or South Carolina (or both).  Many settlers moved into the Catawba reservation during the latter part of the 18th century, either with or without the permission of the Catawba, whose population had been decimated by starvation, small pox and other European diseases.

At least two different Cheek families are known to have settled in and around the Catawba Indian lands.  Silas or Cylas Cheek, a son of William Cheek of Warren Co., NC, arrived in Mecklenburg County by 1790, along with his sisters Phoebe Cheek GOODRICH (married to Matthew GOODRICH), Martha Cheek SMARTT (married to Francis SMARTT) and Mary Cheek SMITH (married to John SMITH).  In addition, Randolph Cheek -- believed to be the son of John "of Anson" Cheek (see previous page) -- leased 160 acres land from the Catawba tribe in 1801, located on Sugar Creek adjoining Silas Cheek. 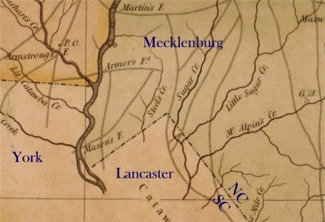 Mecklenburg, York, and Lancaster
from an 1833 map

Although there is no definite proof, the John Cheek who was in York Dist., SC, in 1790 may be the John Cheek, Jr.  ("John No. 2") previously found in the records of Anson and Montgomery Co., NC.  One interesting piece of evidence comes from the records of the Sugar Creek Church (now Flint Hill Baptist Church) which was founded in 1792 and located in the Catawba Indian land.  On July 12, 1794, the church records state, "received Sister Nancy CHEEK by virtue of a letter of recommendation from the Baptist Church in Montgomery County, N. Carolina under the pastoral care of the Revd. Edmund LILLY." (SC Mag. of Ancestral Research, Vol. XVII, No. 3, Summer 1989, p.136.)  This proves that Nancy Cheek came to the Catawba Indian Land from Montgomery County, NC.  The Rev. Edmund Lilly (b.1728, d. 1808-1815) was a large landowner in Anson and Montgomery Counties who also served as pastor of the Rocky River Baptist Church.  Rev. Edmund Lilly's son John Lilly was married to Eleanor Dumas, a daughter of Benjamin Dumas who was a neighbor of John Cheek, Sr.  (See Anson DB C-1, pp. 330-331, deed from Benjamin DUMAS to Jeremiah DUMAS dated Oct. 15, 1757, refers to land on north side of Pee Dee River adj. John CHICK's line.)  (Info on Rev. Edmund Lilly is from The McLendons of Anson County by Rosalind McLendon Redfearn.)

"Nancy" is an old nickname for Ann or Agnes.  Therefore, Nancy Cheek could be the "Agness Cheek" who appears on the 1810 census of Lancaster Dist., SC.  On the other hand, it is also possible that the Nancy Cheek in the records of Sugar Creek Church was actually the wife of Randolph Cheek.  Although most sources state that Randolph Cheek was married to Margaret VAN HOOSE, according to an 1772 deed, his wife's name was Nancy. (Anson DB K, p.56.)  Randolph moved from Montgomery Co., NC, to Lancaster Dist., SC, between 1795 and 1800.  So, the mystery continues.

In any event, it seems fair to assume (although not proven by any means) that the "Widow Cheek" who appears on the 1800 census of York Dist., SC, is also the "Agness Cheek" who appears on the 1810 census of Lancaster Dist., SC.  These clues imply that "John No. 2" may have died between 1790 and 1800, and Agness Cheek was his widow.  Their sons were probaby Silas, Jesse, Jeremiah, and Eli Cheek found in the census records 1790-1810.

Jeremiah Cheek of York/Lancaster SC migrated to Bedford Co., TN, between 1820-1830, where he had many descendants.  Jesse and Eli may be the Jesse and Eli Cheek who moved to Maury Co., TN, prior to 1820.  Recently, DNA testing conducted through the Cheek DNA Project proves that descendants of Jeremiah Cheek of Bedford Co., TN, and Jesse Cheek of Maury Co., TN, are related to known descendants of Richard Cheek of Beaufort Co., NC.  This genetic evidence supports the theory that the Cheeks in York and Lancaster Dists., SC, were the grandchildren or great-grandchildren of Richard of Beaufort through Richard's son, John "of Anson" Cheek Sr.

Other descendants of John "of Anson"

It's likely that John "of Anson" Cheek had many descendants who are not yet accounted for.  Based on census records, as many as 7 or 8 Cheek males were probably born prior to 1800 in Anson and Montgomery Counties in North Carolina, and York and Lancaster Districts in South Carolina.  Most of the Cheek families in these areas had left by 1820 and their movements are hard to trace, due to lack of records.  However, many "stray" Cheeks with names like Jesse, Jeremiah, Silas, and Randolph show up in Tennessee, Kentucky, Illinois, Mississippi, Missouri and elsewhere.  At least some of these individuals are probably part of John "of Anson" Cheek's lineage.

To summarize, the possible descendants of John "of Anson" Cheek include: