Much of the confusion is the fault of a newspaper article that appeared in the Liberty Tribune, Clay County, Missouri, on Jan. 17, 1873, which claimed that Randolph Cheek, an "old citizen" of Bollinger County, was 104 years old (so born about 1769) and his wife was 99 (so born about 1774).  Unfortunately, census records prove the Randolph was actually born about 1780 and Sarah about 1790.  The article also stated that Randolph was born in North Carolina and had 11 children still living and 104 grandchildren.  This part of the article could very well be true; census records confirm that Randolph was from North Carolina, and it is certain that he had many children and grandchildren, although not all of them have been documented.

According to a family story posted on the internet, Randolph Cheek was a full-blooded Cherokee Indian who was born in North Carolina and came to Cape Girardeau, Missouri, long before the Trail of Tears.  There are similar stories about Native American ancestry in many Cheek families.  The Cheek surname is unusual, but in most cases, alas! it's boringly British.  All of the participants in the Cheek DNA Project have European Y-DNA.  Randolph Cheek may be an exception, but for now the question remains open. 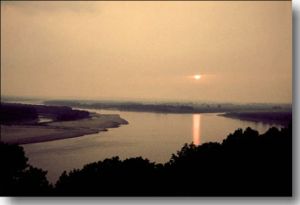 In any event, Randolph Cheek may have traveled to Missouri with Silas Cheek (perhaps a brother or cousin?) who is also listed in the 1830 census of Cape Girardeau County.  Silas apparently died or left the area before 1840, when he disappears from the census.  His widow might be Nancy Cheek, age 40-49 in the 1840 census, with 5 children.  Alternatively, Silas could be the Silas Cheek who is found in Monroe County, IL, in 1840, a few miles up the Mississippi River from Cape Girardeau County.  Nancy Cheek also died or left Cape Gir. County before 1850.  Nancy was probably the mother of Mary Cheek (age 18), Peter Cheek (age 17) and Absalom Cheek (age 12) who are listed in the 1850 census of Cape Girardeau County, MO.

It is not clear exactly when the Cheeks arrived in Missouri.  There is a record of a Jesse Cheek who explored the Current River of Missouri with a man named Ben Rogan during the early 1800's (see Louis Houck, A History of Missouri, Vol. III (1908) p.185), but his relationship to Randolph Cheek, if any, is unknown.  Based on information in later census records, Randolph Cheek was in North Carolina in 1811 when daughter Patience was born, in Kentucky in 1813 when James was born, and in the Missouri Territory by 1820 when Mary was born.  Cape Girardeau County, Missouri, is about 30 miles up the Mississippi River from Kentucky.  The Cheeks settled in the western part of the county, which became Bollinger County in 1851.  This area was originally settled in 1800 by a group of 20 families of German descent from Tryon County, North Carolina.

Although Randolph's parents are unknown, it is possible that he was a grandson of John CHEEK, Sr., of Anson Co., NC.  John Cheek may have had several children and a number of grandchildren who lived for a time around the NC-SC border between Mecklenburg County, NC, and York and Lancaster Districts, SC.  Although the evidence is circumstantial, the first names Randolph, Silas, and Jesse do pop up a lot in these families.  Also, this could explain the children's confusion about whether Randolph was born in North or South Carolina.  The exact location of the state line between Mecklenburg Co., NC, and the neighboring districts in South Carolina was unclear during the 1700's due to the presence of the Catawba Indian Reservation.  It wasn't until 1813 that the boundary was finally established by legislation.  The people in this area are often found in the records of both states.

John Cheek of Anson Co., NC, is believed to be the father of Randolph CHEEK (c.1740-1815) who moved to Giles County, TN.  Randolph (c.1740) had a son named Randolph or Randall Cheek (b. abt. 1780) who married Sally KNOWLEN in 1807 in Mecklenburg County, NC (proven by marriage bonds).  Note that the name Sally KNOWLEN is curiously similar to Sally NOEL, the wife of Randolph Cheek of Cape Gir. according to some sources.  The Randolph/Randall who married Sally Knowlen disappears from the records of Mecklenburg County, NC, after 1812, whereabouts unknown.  Descendants of his brother Valentine Cheek (who moved to Texas) say that Randall never returned from a trip to California in 1849, but this has not been verified to my knowledge.