Note: Many transcribers of the above will misread Jane Cheek's name as "James Cheek." The original document clearly says "her mark" not "his," and on close inspection, the name is Jane, not James. This was most likely Jane Cheek, Richard's wife. 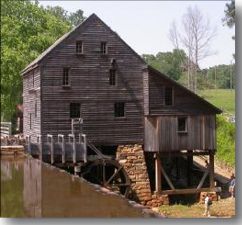 Geographical Note. In 1741, the North Carolina Assembly passed an act to establish the boundary line between Tyrrell, Edgecombe, and Beaufort Counties. The act provided that a Commissioner shall be appointed by each county court to run the boundary line, which "shall begin at the Upper Corner Tree of Jenkin Henry's line on the south side of Roanoke River, and from thence, run a direct line to the mouth of Cheek's Mill Creek, on Tar River . . . " (Source: The North Carolina Historical & Genealogical Register, Vol. II (Jan. 1901), p.256.)

May 1746. Edgecombe Co., NC. Jane CHEEK widow of Richard CHEEK petitioned that son-in-law John BURNEY be summoned to show cause [presumably regarding his administration of the will]. (Edgecombe Court Minutes 1, p.20.)

Will of Richard Cheek of Beaufort Co., NC

Richard Cheek's will is written in a scrawling, somewhat untidy handwriting, probably not the work of a professional "scrivener" or court clerk.  The signature appears to be in the same handwriting.  It's likely that he wrote the entire will himself.

In the name of God Amen the twenty ninth day of September one thousand seven hundred and forty three I RICHARD CHEEK of Beufort County in North Carolina Being well in health and perfect memory but d[?]ed a journey to South Carolina thanks be to allmighty God and calling me to rememberance of the uncertain estate of this transitory life and that all flesh must yield unto death when it shall please God to call do make consitute ordain and declare this my last will and testaement in maner and form following revoking and annulling by thes presents all and every testament and testaments will and wills heretofore by me made and declared either by word or writeing and this is to be taken only for my last will and testament and none other and first being penitent and sorry from the bottom of my heart unto almighty god my Savior and Redeemer on whom and by the merits of Jesus Christ I trust and beleave assuredly to be saved and to have full remistions and forgiveness of all my sins and that my sole with my body at the general day of Resurrection shall rise again with Joy and through the merits of Christs death and pations possess and inherit the Kingdom of Heaven prepared for his Elect and Chosen and my body to be buried in such place where it shall please my executors hereafter named to appoint and now for the getting of my temporall estates and such goods chattells and debts as it hath pleased God far above my desearts to bestowe upon me I do order give and dispose the same in manner and form following that is to say first I will that all those debts and duties as I owe in right or Conscience to any manor of person or persons whatsoever shall be well and truly contented and paid within conveanient time after my death by my executors hereafter named--

Item I Lend in writing to my wife JANE CHEEK during her life or widowhood six cowes & calves and six Steares Two five year old steares and the other four steares, one yeare younger than an other untill they come to one years old and the above cattle to be at her chose and one bed and furneture at her chose and one mare called Blase and one mare colt taken of of a mare called Phillis and the Halfe of all the other House hold goods and the Hoggs to the use of sd family except one sow & pigs for every child as they come to age or choseing thear guardian[?]

and I give my son RANDOLPH CHEEK one good feather bed and furniture and one black [??] [y]earling colt come of a mare called Blase[?]

Item I give to my son WILLIAM CHEEK one hundred and fifty acres of Land Beginning at the mouth of a branch of the Low side of my mill Creek opposite to JOHN BURNEY's Corn feald goe Runing to my Lore [lower] corner tree X a red oak neare to John AVERETS be it more or less.

Item I give to my son RANDOLPH CHEEK the plantations I now live on Begining at the mouth of the mill creek and runing up to the fork and up the uper foark to JOHN BURNEY's corner, thence down bound by BURNEY's line and WM. CHEEK's goe as the patent derects to the River and goe to the begining for Two hundred acres more or less including the water mill

Item I give unto my son ROBERT CHEEK one hundred and fifty acres of Land joyning to JOHN CHEEK and Laid off as the sd JOHN CHEEKS is to be and at the uper part joyning.

Item I give to my son RICHARD CHEEK, Jr. one hundred and forty acres of Land joyning to ROBERT CHEEK it being the uper part of the Track joyning to a place called the Buck horn spring

and my desire is further that all my cattell, beds and other estate that I have not partickarly made mention of above may be equally devided amongst my children that is to say ELIZABETH BURNEY, WILLIAM CHEEK, RICHARD CHEEK, JANE CHEEK, JOHN CHEEK, ROBT. CHEEK, JAMES CHEEK, ANN CHEEK, RANDOLPH CHEEK.

I further will my sons ROBT CHEEK & JAMES CHEEK and RANDOLPH CHEEK to free from servatude at the age of eighteen years old or choose theare gardens [guardians] at forteen years old and I leave my Daughter ANN CHEEK free at sixteen years old.

I do apoint WM. CHEEK, RICHARD CHEEK, JR. and JOHN BURNEY my executors.

Witness my hand and seal the day and year above written. RICHARD CHEEK

The notes on the next page are in a different handwriting, presumably written by the court clerk:

April 30. 1745. The within Will of RICHARD CHEEK Proved before me by the Oaths Of WILLIAM HIX & JOHN THIGPEN. - E. MOSELEY C. Just.

Also on the same day & year JOHN BURNEY took the Oath of an Executor to the said Will before me
E. MOSELEY C. Just

Beaufort County April 30th. The within last Will of RICHARD CHEEK late of the sd County Planter deced (by the advice of His Honour the Chief Justice to JOHN BURNEY Exer of the sd will) was and is literaly recorded in the records of the sd County immediately after the minutes of March Court 1744/5.
Testes
JOHN FORBES Cler Court

Recorded in the Sect office in
Book N, Page 144

Richard Cheek's original signature appears on 2 other documents on file with the North Carolina Archives: