A dispute over tobacco… Sometime during the mid-1750's, Dibdale Holt and Abraham Cocke got into a dispute which resulted in a lawsuit. John Dabney, who seems to have been associated with a tobacco warehouse in Amelia County (tobacco was used as currency in colonial Virginia), gave a deposition testifying to various transactions of tobacco in 1752 and 1754 involving Dibdale Holt, Abraham Cocke, Robert Cheek and William Newsum. "This Deponent Farther saith that … This Depont heard Capt. Abrahm. COCKE tell the Inspector to have the Tobacco passed in his name and said then no Body could meddle with it and this Deponent believes that the Tobacco brought Down the last Year Robt. CHEEK was Overseer for the said HOLT was passed in the name of Capt. Abrahm. COCKE". (Magazine of VA Genealogy, Vol. 36, No. 4, pp.285-286 (Nov. 1998), transcription from Amelia County loose papers by Barbara Vines Little.) 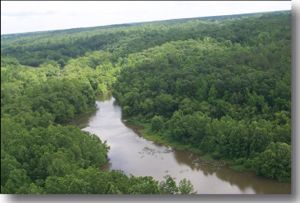 Mar. 9, 1762. Brunswick Co., VA. Robert CHEEK witnessed a deed from Sampson CORDLE (or CAUDLE), planter, and Sarah his wife, of St. Andrew Parish, Brunswick Co., to William DOWSING of said parish, 96 acres on the lower side of Rocky Run adj. DAVIS, said Sampson CORDIL & his son John, DRAPER, and QUARLES, being the line formerly made between said Sampson CORDIL & Stephen CORDIL. Other wits: Hugh WILLIAMS and Richard CAUDLE. Proved Mar. 22, 1762. (Brunswick DB 7, p.84.) In connection with this transaction, Robert CHEEK and Hugh WILLIAMS also witnessed a bond given by Sampson CORDIL and Richard CORDIL to William DOWSING on condition of Sarah CORDILL's relinquishment of right of dower. (Brunswick DB 7, p.85.)