Robert Cheek and his family left Brunswick County, VA, in 1762 and purchased land on Sandy Creek in Granville/Bute County, North Carolina.  Sandy Creek begins near the present-day town of Henderson in Warren County and flows across Franklin County into Nash County where it becomes Swift Creek.  It's not clear whether Robert Cheek's land was located in what later became Warren County or Franklin County.  Some of his neighbors, such as the Estes (Estridge) family, appear to have lived in the area that became Warren County.  View a Google map. 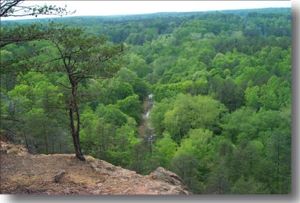 Robert Cheek arrived in Orange County, NC, by 1778 when he entered a claim for a land grant on New Hope Creek.  New Hope Creek arises in Orange County about 5 miles south of the town of Hillsborough.  The creek originally joined the Haw River in southern Chatham County, but it now feeds the Jordan Lake reservoir south of Chapel Hill.  The exact location of Robert Cheek's land is unknown.  However, his neighbor George REAVES owned land on Morgan Creek, which is one of the upper branches of New Hope Creek. Another neighbor, Andrew MITCHELL, also owned land on the "head branches of New Hope." (Source: Pat Shaw Bailey, Land Grant Records of North Carolina: Vol. 1, Orange County (Mountain Press, 1990).)  View a Google map.

Note: The ESTRIDGE or ESTES family had been neighbors of the Cheeks in Granville/Bute County. Two of Thomas ESTRIDGE's daughters married sons of Robert Cheek.

Nov. 1816, Robert Cheek was sued by his son-in-law, Charles JONES.  The surviving records do not reveal the basis of the lawsuit, but Jones was ultimately awarded £210.  Around the same time, Robert was also sued by his son, Richard Cheek, perhaps for support.  Richard was awarded £100.  Both judgments are mentioned in the 1823 case of John McKerrall v. Stanford Cheek (NC Archives File No. CR.07.325.136, Civil Actions Concerning Land for Orange Co., NC, 1823 folder.)  Charles Jones and Richard Cheek were involved in a bitter feud at the time, most likely over the distribution of Robert Cheek's land or property.  Around May 1816, Richard's wife Jane accused Charles Jones of attacking her and beating her into unconsciousness with a sassafras stick.  Click here for more about the bizarre case.