ilas or Cylas Cheek was either the youngest or second-youngest son of William Cheek of Warren County, NC.  He moved to Mecklenburg County, NC, prior to 1790.  He may be the Silas Cheek who obtained a marriage license in Montgomery Co., NC, in 1788 or 1789, but if so, the name of his wife is unknown, and she was soon out of the picture.  Silas Cheek's 1810 will makes no mention of a wife, but names four "base-born" (i.e., illegitimate) children by "Mary Smartt."  She is believed to be Mary Armstrong Smartt, the widow of Elisha Smartt who died in Mecklenburg Co., NC, in 1796.  It's not known why Silas and Mary failed to get married, but it's possible Mary would have lost Elisha's property if she remarried.  Many wills of the era contained a harsh remarriage penalty.  Or, it's possible that Silas and his wife (if he had one) were separated but never officially divorced.  In addition, morals in the North Carolina backcountry were notoriously loose by the standards of the time.  When the Anglican minister Rev. Charles Woodmason

traveled to the area in 1767-1768, he was shocked by the women he met.  He wrote disapprovingly in his journal that "Indeed Nakedness is not censurable or indecent here, and they expose themselves often quite Naked, without Ceremony—Rubbing themselves and their Hair with Bears Oil and tying it up behind in a Bunch like the Indians—being hardly one degree removed from them."

June 1801, Lancaster Dist., SC. Land belonging to CILAS CHEEK is mentioned in a lease obtained by Randolph CHEEK for 160 acres in Catawba Indian land in Lancaster SC, adjoining Sugar Creek and the Hurricane Branch. (Source: transcription provided by Louse Pettus.) The Sugar Creek area is located on the border of Mecklenburg Co., NC, Lancaster Dist., SC, and York Dist., SC. The exact location of the state line was not established until 1813 and inhabitants in the Indian lands often appear in records in both North and South Carolina.

Oct. 31, 1808. The will of Cylas CHEEK dated Oct. 31, 1808, proved July 1810, "I do lend to Mary SMART's four base born children, namely, Robert T. SMART, Sarah B. SMART, Rebecca ARMSTRONG, and John S. SMART, all my estate, real and personal. And it is my will, that my estate should be kept together until the said Robert T. SMART arrives to twenty-one years of age, and then equally divided, share and share alike with the said four children, to them and their heirs forever, and that said children be raised well, and given good learning. If either of them should die without any heir in marriage, then their legacy to their own brothers and sisters, and the profits that should arise from this estate, while kept together, as yearly incomes, to be laid out to the use and benefit of the said children." Execs: William PETTUS, William JACKSON, William H. SMITH, Thomas B. SMITH. Wits: Jesse CATHEY, Jason BLAIR. (Meck. WB A, p.196).

Note: Robert's middle name is often transcribed as Finias or Tims, but it was probaby Tines, after his uncle Robert Tynes Cheek of Warren Co., NC.

There is a North Carolina Supreme Court case, Samuel Cox et. al. v. H.W. Marks et. al., 27 N.C. 361 (1844), which concerns a dispute between the administrators of the estate of John S. SMARTT, also known as John CHEEK, and John's sisters over the disposition of certain slaves and their issue that had been willed to them by Silas CHEEK. According to the case, John S. SMARTT aka John CHEEK died in May 1844 and the sisters took possession of the slaves in question. Samuel COX, administrator of John Cheek's estate, sued the sisters to recover the slaves. The sisters argued that they were entitled to the slaves because John had "died without an heir in marriage" (i.e., legitimate children) as stated in Silas Cheek's will. The court, however, found in favor of the administrator on a legal technicality. The case does not identify John's heirs.

Many thanks to Louise Pettus for providing information about this family! 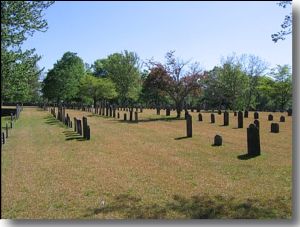 She is probably the Mary CHEEK who was buried at the old Steele Creek Presbyterian Church which is located near Interstate 77 in Mecklenburg Co., NC, near the border of York, SC.  Cemetery surveys done many years ago recorded markers for Mary Cheek, Robert T. Cheek, John S. Cheek and Sarah B. Cheek.  These markers can no longer be found, although the location of the graves is listed in the cemetery records.  The markers may have fallen over and were covered up by soil during a period of time when the cemetery was not being maintained.  According to the prior surveys, Mary Cheek's gravestone stated she died Nov. 4, 1833, in her 60th or 65th year (sources conflict).  Her children John CHEEK, Dr. R.T. CHEEK, Sarah B. CHEEK, and Rebecca A. MARKS were also buried in this cemetery.

Mary SMARTT was the widow of Elisha SMARTT who died in Mecklenburg Co., NC, in 1796. Mary ARMSTRONG and Elisha SMARTT posted a marriage bond in Orange Co., NC, Mar. 7, 1792, with bondsman John HOLMES.