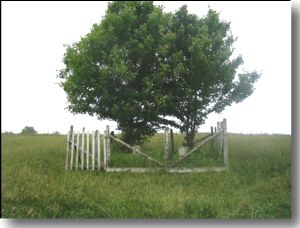 illiam Cheek was the youngest son of Chesley and Phebe Cheek.  He enlisted in the army on May 3, 1862, at the age of 18, in Co. I, 61st NC Infantry.  He was taken prisoner on August 19, 1864, at the Second Battle of Weldon Railroad in Petersburg, Virginia, also known as the Battle of Globe Tavern.  He was incarcerated at Point Lookout, Maryland.  He was released in an exchange of prisoners on March 14, 1865.  Although he survived 7 months in captivity under terrible conditions, he contracted pneumonia and remained in poor health for the remainder of his life, which sadly, was short.  He died in 1873 at the age of only 29. (Source: personal correspondence with descendant Loretta Hodgkinson; "American Civil War Soliders" on Ancestry.com.)

Several of William's Civil War letters were saved by his son Crockett Columbus Cheek who emigrated to Canada.  Only one letter still remains in the family; the rest were donated to a museum in the 1950's.  The surviving letter was written on May 27, 1864, about a month after William's father Chesley was murdered in Alleghany County, allegedly by "bushwhackers".  The letter is addressed to William's sisters Gilley and Lucinda.  This transcription was kindly shared by descendant Loretta Hodgkinson.

I thy morning seat myself to drop you a few lines. Which Will inform you that I am, Well as usual trewly hoping these few lines may reach you in dew time and find you all well an doing as well as the nature of the case will admit. I can inform you that I, recieved your kind letter bearing date of May thee 6. I was glad to hear that you was well. as for news I havent any to Write now more then I rote sometime past. I have got back to peters Burg. I got here yesterday I, am gaurding the Baggage. I dont know when I shal go to the Co. they are talking about moving the Baggage over there to day and if they do, I shal go to day or to-mmorow. I havent heard from the Co. since I rote. there is many of the boys wounded among them. Richard is wounded on the leg slightly. I dont know Whether he was hurt Bad enough to go to the Hospital or not if he has gone to the hospital he is gone to richmond. they are furlowing all the wounded that is able to go home that was wounded bad So I will say something in relation to your affairs at home. in the first place we want you to keep the property to gether if possible. you rote to us to know what we'd druther you would done about it. If you can get your Business fixed Without having a sail, of course it Would be the Best. You had just as well give the property a way as to have it sold at a sail. We want you to get some buddy to attend to it if you can, and have nothing sold By no means So it is useless for me to say any thing more about that for you have got our concent, having that we Want nothing sold.

I will say to you times is still hard here at present our barucs is in living in these rifle pits and so is the enemy, They are clost to each other, there hasent been any fighting between here and Drures Bluff in 3 or 4 days.But we dont know how soon they will commence, they has to be another heard [hard] battle before many days. between here and Drures Bluft. there was hevy fiting going on the other side of Richmond day be fore yesterday. it looks like the war cannot continue much longer if they keep fighting on as they have for the last 20 or 30 days. I hope Richard will get a furlow to come home. you rote that you wanted us to try to get a furlow and come home of course we want to come home very bad but there is no chance for a well man to get a furlow at this time but it is a great time for a sick man to get a furlow but have to have room in the Hospital for the wounded so we will come home the first chance. But if it is gods will for us to sic-an and die or be killed in this army and never have the oppertunity of meeting on this earth again I hope we will meet in heaven where parting will be no more. so do the best you can and try to content yous Selvs if possible and dont trouble a bout us nor a bout our decest father, all the troubling and lamenting does no good. So will soon close hoping to hear from you soon. I rote you a letter day be fore yesterday and rote for you to mail first at Glade Creek but you may Mail at Old C:H, Va. I shall direct you there for the rode is open now. So nothing more at present, only I still remain your loving Brother until death

yours
With respect
Wm Cheek

"William M. Cheek was born April 14, 1844 in Vox Community, NC, and died December 19, 1873 in Vox Community, NC. He married Matilda Rector on Feb. 4, 1868 in Vox Community, she was the daughter of Warren Rector and Nancy Edwards. William was a confederate vetran who enlisted in 1862. He was assigned to Company l, 61st regiment NC infantry, along with several of his Cheek family. There was quite a few that enlisted in the same month. He was in many battles near the end of the war, and was taken prisoner by the Yankees on July 30, 1864. He was exchanged for a Yankee prisoner about 100 days after his capture in Richmond VA, and rejoined his regiment, but contacted pneumonia, and was never in good health again. William married Matilda Rector and they had two children, Sarah Ann Cheek and Crockett Columbus Cheek. William had a wound, possibly a gunshot wound, from the war, on his back that would not heal. His health went down hill and he got weaker and weaker. Matilda nursed William during his illness. Matilda would put William on a sled (that they used on grass) and would pull him up the hill where he enjoyed sitting under the cherry tree. When he died, he was buried there. They call it the William Cheek Cemetery, at Allegany Co. NC. This is a term they use for private burial grounds on private property. Matilda went on to marry James Collins but at her death she was buried beside William, at Matilda's request. Matilda was in her 100th year when she died. The place where William and Matilda are buried is on the Page Evans farm in the Vox Community of Allegany NC, but because William must have owned the land at the time of his death, it is referred to as the William Cheek Cemetery."