John Jennings, Sr., was born abt. 1706, possibly in Orange Co., VA, and died 1811 in Wilkes Co., NC. The name of his wife is unknown (some sources say Ann Burton). John Jennings is buried in a family cemetery near Mulberry Creek, Wilkes Co., NC. 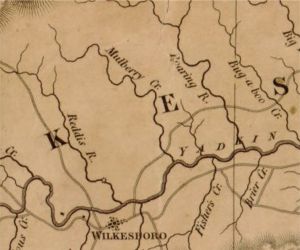 ohn Jennings, Sr., arrived in Wilkes County, NC, by 1785 and settled on Mulberry Creek.  According to Heritage of Wilkes County (1982), p.288, article no. 721 by W.O. Absher, he may have come from Orange County, Virginia.  There is a John JENNINGS listed on the 1782 state census of Orange County, VA, but "Jennings" is a fairly common name, so it is hard to say if this is the same individual.  More research is needed.

Just before his death in 1811, John Jennings sold his land (100 acres) to his son, Luke Jennings.  John and Luke Jennings are buried in a family cemetery on their land near Mulberry Creek, between the towns of North Wilkesboro and McGrady.  John's gravestone reportedly reads "Patriot" and shows a year of birth of 1706.  If accurate, this means John came to North Carolina in his 80's and died at age 104, which seems somewhat unlikely although not out of the realm of possibility.

"Jennings" is a fairly common English surname that means "Little John."  Several unrelated Jennings families came to the Upper New River Valley region of North Carolina and Virginia during the late 18th century.  They include:

It is important not to confuse these different Jennings families.  Whether any of them were related to each other is unknown.  The following records pertain to "our" John Jennings on Mulberry Creek in Wilkes County, as opposed to the other John Jennings on Mitchell River or Hunting Creek.

In Wilkes County Heritage, Vol. I (1982), p.188, the local historian and genealogist Mrs. W.O. Absher warns that "The Jennings legend circulated among many Jennings descendants in Wilkes County and elsewhere, is contradictory and very seldom corresponds with any records found."  What was she referring to?

After spending many fruitless hours trying to verify a Jennings family tree I found on the internet, I learned the answer.  Do not trust any source that traces this family to Birmingham, England—especially family trees which show a connection to Humphrey Jennings (Jennens), the so-called "Ironmaster of Birmingham."

The steel tycoon Humphrey Jennings was one of the richest men in England during the 18th century.  His grandson William was an eccentric bachelor who died in 1799 with an unsigned will tucked in his coat pocket.  The battle over the estate dragged on for more than a century.  Decades after Williams' death, potential heirs were still crawling out of the woodwork.  (See, for example, "A Miserly Monte Cristo; the Enormous Wealth of William Jennings"

, which centers around a probate lawsuit that is "so complicated that no man alive knows what it means".  The anticipation of fortune (never realized) drives some of the characters to madness and even suicide.

During the 19th century, many fraudulent family trees were created to drum up financial support for the litigation over the Jennings estate.  A fascinating discussion of genealogy fraud and Jennings litigation appears in the article "Stranger than Fiction? The Jennens Inheritance in Fact and Fiction," by Patrick Polden, Common Law World Review, Vol. 32, No. 4, p.338 (2003).  These family trees still circulate and are relied upon by unwitting descendants who know nothing about the legend of the Jennings fortune.  Unfortunately, there is simply no proof that Ludewick Jennings of Wilkes County, North Carolina, was related in any way to the Jennings or Jennens family of Birmingham, England.  According to Mrs. W.O. Absher, Ludewick Jennings was the son of John Jennings, who may have come to Wilkes County from Orange County, Virginia.  No one to my knowledge has been able to trace the origins of John Jennings' family in England, where "Jennings" is a common surname.