olomon Jennings was born about 1817 in Wilkes Co., NC.  His father, William M. Jennings (1782-1856), relocated from the Mulberry Creek area to the Traphill section of Wilkes County sometime in the early to mid-1800's.  Traphill is a community in the Blue Ridge near the border of Alleghany (formerly Ashe) County.  Due to uncertainty over the location of the county line during the 19th century, families in Traphill are often found in records in both Ashe and Wilkes County.

Solomon Jennings married Sarah Fender, daughter of John Fender and Martha Toliver, about 1834 based on the ages of their children.  Solomon's older brother Thornton Jennings was married to Sarah's sister Charity Fender.  By 1850, Solomon and his family had moved to Grayson County, VA, where they settled in the Peach Bottom area south of the New River.  Peach Bottom is across the state line from the Vox community in Alleghany County, North Carolina, home of the Cheek family.    View a Google map.

Sarah (Fender) Jennings died of illness in 1860 at the age of only 36.  She was the mother of 9 children.  Solomon remarried but did not have any more children.  He lived to the age of 78.  Sarah and Solomon Jennings are said to be buried in an old cemetery on their former land in the Peach Bottom area of Grayson Co., VA, but their gravestones are no longer legible. 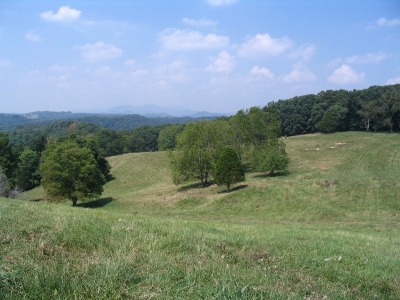 From Karl Jaeckel, Denver, CO: "I have a letter written from Sarah (Edwards) Choate to her daughter Nancy dated August 24, 1860 in which she mentions your ancestor Sarah (Fender) Jennings. She wrote,

"Sally Jennings is dead. She died the 10th of June. She lay sick a long time with the dropsy. She died exhorting. She … talked to her folks a good while before she died, and at the last she told Solomon that she wanted to talk a right chance, but she was too weak, and he raised her up, and in a few minutes her voice come to her an she could a been heard fifty or a hundred yards. Would tell you all about her talk, but it is too tedious. She told them she wanted Douglass Carr and Lonely (?) to preach her funeral. It is to be preached at Solomon's the third Sunday in September."

Apr. 22, 1861, Grayson Co., VA, Court Minutes: "Ordered that Warner HALE be and he is hereby appointed overseer of the precinct of road from the Sigger Ford to the ford of the River near Warner HALE's fish trap in the room of Fielden CARR, resigned and with the following hands he keep the same in legal repair to wit: Fielden CARR, F. HALE, David HALE, & Solomon JENNINGS."

Sept. 11, 1873. Alleghany Co., NC. Jasper BILLINGS to William EDWARDS, for $96 and in consideration of assistance in excavating & assaying, 6/16 of minerals in the digins known as the Jasper BILLINGS mine situated on 30 acres on Little River, beg. mouth of the branch between T.C. DOUGLAS & Solomon FENDER, same branch being the line between Solomon FENDER & Orfa ANDERS, up said branch to the old ford where the mill path crosses leading from where Wm. H. JOINES now lives to the mills on Little River where Solomon JENNINGS now lives, the ford crossing the branch near a solid ledge of rocks, then to the State Road, a hollow in a sandy flat, & the Little River. Signed: Jasper BILLINGS. Wit: W.C. FIELDS. Proved Sept. 11, 1873 (ack'd). (Alleghany DB 2:81.)

Will of Solomon Jennings of Grayson Co., VA

In the name of God amen. I SOLOMON JENNINGS SR. of the county of Grayson and State of Virginia being of sound mind and disposing memory and knowing the uncertainty of life and the certainty of death do make constitute & ordain this my last Will and Testament as follows

1st I will my soul to the God who gave it

2nd I will to my beloved wife ELIZABETH JENNINGS who has been so faithful and kind to me all of the household and kitchen furniture that she brought here after our marriage together with her sewing machine One horse briddle and saddle of her own choice two cows of her own choice Four hundred dollars $400.00 in cash the sum being the amount that she paid unto the lands of LUKE JENNINGS my son he having received his full portion of my estate

I have given my son JESSIE JENNING six hundred and thirteen dollars in lands and I desire that my other children be made equal with him before he receives any more of my estate I having given my son heretofore four hundred dollars in in land except WM. JENNINGS who received money

6th I will that the remainder of my personal property not heretofore disposed of in this will be sold by my executors and the proceeds applyed to the payment of my just debts and funeral expenses and the remainder applied to those who have received none of my estate and in case my personal property should fail to pay my debts and liabilities then and in that event I do hereby empower my executors to sell enough land off the South East end of my farm to pay off said debts if any.

7th I do hereby constitute and appoint my trusted friends R.S. CARSON and E.F. COX Executors of this my last Will and Testament In witness thereof I SOLOMON JENNINGS SEN. to this my last will and testament have hereunto set my hand & seal this the seventeenth day of January 1895.