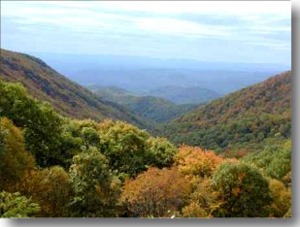 illiam M. Jennings and his wife Martha JOINES originally lived in the Traphill district of Wilkes County, North Carolina, high in the Blue Ridge Mountains near the Ashe (later Alleghany) County line.  They seem to have moved into Ashe County by 1850.  They are listed on the same page of the 1850 census as Elias SIMMONS, Joel SIMMONS, and Thomas SMITH, all of whom owned land in the Blue Ridge around Laurel Fork of Brush Creek.  William's will was probated in Ashe County, and the land which was sold after his death was located on the Little River adjoining Richard WILLIAMS, Starling TOLIVER, and Levi FENDER, who lived in the vicinity of the Little River and Glade Creek.  (Alleghany DB 1, pp.38-39).  These clues place William Jennings' land somewhere in the southwestern part of Alleghany County, probably in Cherry Lane Township.

William Jennings and Martha Joines were likely married around 1805.  Martha's father, Thomas JOINES (also spelled Goins in some records) was one of the early early settlers in Wilkes County.  The Joines family lived on the upper reaches of Big Elkin Creek and the Roaring River in the area around Traphill.

Another son is believed to be Luke JENNINGS, who moved to Owen Co., Indiana, prior to 1850 and later lived in Cherokee Co., Kansas.  An eighth child has never been identified but was probably a daughter born between 1810-1815, based on census records.

Martha appears in the census in 1860 at the age of 70, living with her son William Jr. and his family.  She is not listed in any further census records, so she presumably died sometime between 1860-1870.  She and her husband were probably buried in a family cemetery which is now lost.

May 5, 1807. Wilkes Co., NC. Deed from Matthew CAUDILL to William JINNINGS, 51 acres on the north fork of Mulberry Creek on the north side of a mountain, including the plantation, for $36. Signed: Matthew CAUDILL. Wits: Robert MARTIN, John KENEDAY. (Wilkes DB F-1, p.472.)

Will of William Jennings

I WILLIAM JENINGS acknowledge myself in my right mind and appoint THORNTON JENINGS and JOHN CARSON to attend to all my business, my son and son-in-law. My last Will and Testament is this that I desire my wife PATSY to have one hundred dollars and a good horse and to live amongst her children as she pleases and the remainder of all my property notes and land to be equally divided among my eight children to my book of record.

I Robert GAMBILL Clerk of the Court of Pleas & Quarter sessions for the County of Ashe & state of North Carolina do hereby certify that the within will was duly proven by the oath of Martin JENINGS one of the subscribing witnesses to said will and ordered to be recorded.

Note, William Jennings's land was sold on Apr. 25, 1859, for $870.  (Alleghany DB 1:38.)  $104.87½ is one-eighth of $839.  The difference of $31 probably covered fees and costs.  The will states that William Jennings had 8 children, but only 6 are identified in the estate file.  It is possible that the other 2 did not live in Alleghany County, so were not present when the executor distributed the sale proceeds on April 1, 1859.  Presumably he got the money to them later in some other fashion which was not recorded.