by F.E. Woodruff (NY: Grafton Press, 1909).  The family is descended from John WOODRUFFE (1604-1670) and his wife Ann, who came to Lynn, Massachusetts, from Canterbury, England, in about 1639.  The following year (1640) they joined a group of Puritan settlers who founded the village of Southampton, Long Island.  Later generations of the Woodruff family settled in Elizabethtown and Westfield, Essex County, New Jersey.  For more information, see the website "The Woodruffs of Elizabethtown" 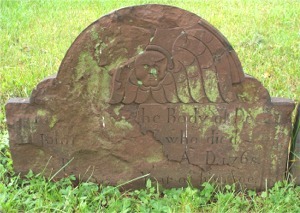 Moses "Manassa" Woodruff married Phebe Marsh about 1759, probably in New Jersey.  Although her parents have not been identified, she was doubtless a member of the large Marsh family of Elizabethtown in Essex County, New Jersey.

Moses "Manassa" and Phebe Woodruff joined the Westfield Presbyterian Church in 1761 (C.N. Woodruff, supra, p.14), and baptised seven children at the Westfield Presbyterian Church in New Jersey, the last being Moses Woodruff, Jr., on Apr. 1, 1772 (id., p.190).  After that, there is "no further data documented and no burial records" for this family in Essex County, New Jersey (id.)  In other words, Moses and his family appear to have left New Jersey sometime after 1772 and C.N. Woodruff did not know what became of them.  Later researchers located them in Surry County, North Carolina.

After moving to North Carolina, Moses Woodruff and his family settled in Surry County on the south side of the Yadkin River in the vicinity of Fox Knob, Pipes Creek, and the headwaters of the South Fork of Deep Creek.  (Fox Knob is now known as Star Peak; Pipes Creek is called Lineberry Creek.)  This part of Surry County became Yadkin County in 1850.  He also acquired land on the north side of the Blue Ridge, in the part of Wilkes County that became Ashe County in 1799 and Alleghany County in 1859.  Near the end of his life, Moses "Manassa" moved to Ashe (Alleghany) County, probably to live with his son John Allen WOODRUFF who owned land on Brush Creek and Bullhead Mountain, and to be near his daughter Phoebe who lived in the Bullhead area with her husband Francis BRYAN.  Moses died in 1817 at the age of 83.

Note: The above land was located in the part of Wilkes County that became Ashe County in 1799 and Alleghany County in 1859. The parcel was originally "entered" by Baker AIRS [AYERS?]. The claim was taken over by Moses Woodruff at an unknown date. 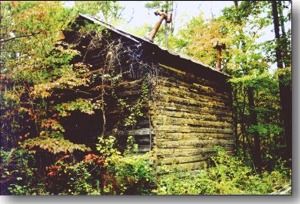 An old cabin in Yadkin Co., NC
photo from the Pipes Genealogy Page

1786 Tax List, Surry Co., NC.  For some reason, Moses Woodruff does not appear on the Surry County tax list of 1786, but we do find Nathaniel WOODRUFF Jr. (300 acres) and Samuel WOODRUFF (300 acres).  Nathaniel was possibly Moses's uncle Nathaniel (1719-1790), who did not stay in Surry County but went to SC where he died in 1790.  Samuel may have been Nathaniel's son or another cousin.

Note: The above land grant Pine Swamp Branch in Wilkes County was probably located in the area that later became Ashe (Alleghany) County.

Note: The above land was located in the part of Wilkes County that later became Ashe, then Alleghany County. It was probably located near the land grants that Moses Woodruff took over from Baker AIRS (see above).

Note: The above tax record suggests that Moses Woodruff was over the age of 60, because he was not listed as a "poll."

Legal Disputes.  There is an interesting legal controversy that continued for many years after Moses Woodruff's death.  In June 1824, the North Carolina Supreme Court heard a case brought by an African-American man named "Free Jack", probably the "fellow Jack" mentioned in Moses Woodruff's will.  Jack sought his freedom on the basis that his mother, Jean SCOTT, had been a free woman and not a slave.  The case states that in 1784, "the Plaintiff [Jack] was indented by Surry County Court, as a free boy, to one MEREDITH, who frequently said he was free, but at length sold him to one Moses WOODRUFF; Woodruff afterwards sold him, and stated, that as he was reported to be a free boy, the purchaser must take him at his own risk."  Although the case is a little hard to decipher, it appears that Jack's lawsuit was successful, because on appeal the defendant (i.e., Free Jack's purported owner) argued that certain evidence had been improperly admitted, and the North Carolina Supreme Court ruled that the evidence was proper, thus upholding the verdict.  (Free Jack v. Woodruff, 3 Hawks 106, 10 N.C. 106, 1824 WL 327 (N.C.), June term 1824.)  Note, forty years earlier, on May 13, 1779, the Surry County Court heard a case brought by Jean Scott asserting that she had been born a free woman and was being unlawfully kept as a slave by Abraham CRESON.  The court found in her favor and ordered that she be freed and her children bound out for their support and education.  See North Carolina Court Minutes Abstracts, Volume I (1768-1785) by Mrs. W.O. Absher.  Unfortunately, the Salisbury Superior Court later reversed the order, finding that the Surry County Court had no jurisdiction to free a slave.

The other slave mentioned in Moses Woodruff's will was also the source of a legal dispute which ended up in the North Carolina Supreme Court in June 1843.  (Mary MCBRIDE v. Richard CHOATE, Adm'r, et al.)   According to the case, "Moses WOODRUFF, of the county of Surry, died in the year 1817, having by his last will and testament bequeathed to his wife Elizabeth 'the labor of his negro wench Sarah, so long as the said Elizabeth should live, and at her death, the negro wench to his daughter Mary MCBRIDE.'  The case further relates that Mary McBride was the wife of John MCBRIDE, who died leaving a will dated Oct. 2, 1821, in which he attempted to dispose of the said Sarah, then in possession of his mother-in-law, to his three sisters-in-law, Lydia PACE, Hannah MOORE and Phebe BRYAN.

Then, in 1837, Elizabeth WOODRUFF (widow of Moses Woodruff) died.  In 1839, Mary MCBRIDE filed suit against Aaron WOODRUFF and Richard CHOATE, alleging that Aaron WOODRUFF and one Isham CHOATE had conspired to deprive her of her right (under Moses Woodruff's will) to have Sarah and her children after the death of her mother.  She claimed that Aaron Woodruff and Isham Choate had convinced Elizabeth Woodruff, who was aged and very weak of intellect, to sell Sarah and her 2 children to them for $300.  Isham Choate then took them clandestinely to Georgia where they were sold.  Elizabeth Woodruff died in 1837, intestate and insolvent; Isham Choate died in Georgia "recently" and Richard Choate was appointed his administrator.  A witness, Samuel BAUGUS, claimed to have seen the deed of sale among Isham Choate's papers.  The case was dismissed on the ground that there was no evidence against Aaron Woodruff and that Richard Choate had fully administered that portion of Isham Choate's estate that was in North Carolina.  (Report of Cases in Equity Argued and Determined in the Supreme Court of North Carolina, Dec. 1841-June 1843.)  [Note, Aaron Woodruff may have been Mary McBride's nephew, the son of John Allen Woodruff.]