oses Cockerham, Sr., arrived in Surry County, NC, by 1771, and settled on Fishers River.  According to Emmett E. Cockrum, A History and Genealogy of the Cockerham Family in America, p.82, "Moses Cockerham, 3rd son of John Cockerham, was born in Lunenburg Co. before 1737.  He was in Surry Co. NC, from 1771 till his death in 1817."  However, other sources identify Moses' father as William Cockerham of Caroline County, VA.  Moses Cockerham's wife's name was Elizabeth (proven by Moses' will).  Her last name is often given as ELLIOT, but verification is needed.

Moses Cockerham, Sr., of Surry Co., NC, is often identified as Moses V. Cockerham in published family trees, including the article in Surry County Heritage Vol. I.  So far, I have not been able to verify that his middle initial was "V." and some believe it was an error by a long-ago researcher.

Dec. 12, 1767. Moses COCKERHAM witnessed a power of attorney given by Elizabeth WALLS to her brother Richard WITTON. (Mecklenburg DB 2, p.53.) 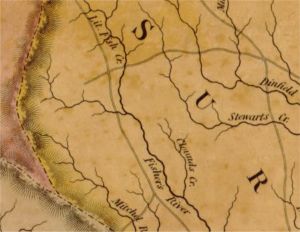 Aug. 27, 1777. Moses COCKERHAM and others purchased property from the estate of Ann ELLIOT. (Surry WB 1, p.87.)  Note this record record may be the source of the claim that Moses Cockerham was married to a woman named ELLIOT.  Purchasers at estate sales were often, though not always family members of the deceased.

Aug. 11, 1778. Moses COCKERHAM enters 300 acres in the Hollows on Rentfroe's Creek adj. James DOAK. (Surry Land Entry No. 424.)  Also described as being on both sides and in the fork of Little Fishers River under Fishers Knob. (Source: Joseph Winston His Entry Book by Agnes Wells (self-pub., 1987).)

Undated. Moses COCKERHAM enters 50 acres on both sides of Fishers River including his improvement. (Surry Land Entry No. 1915.)

1820 Census, Surry Co., NC: the household of Moses COCKERHAM, Jr., includes a white female over age 45; this might be Moses Jr.'s mother (widow of Moses Sr.).

Will of Moses Cockerham of Surry Co., NC

Note: the North Carolina Archives file contains two versions of Moses Cockerham's will.  The spelling "Cockram" is used in the original will, but "Cockerham" appears in the copy made by the clerk Joseph Williams.

I Moses COCKRAM of the County of Surry and State of North Carolina do make and ordain this my last will and testament in manner and form following that is to say,

First I give and bequeath to my dearly beloved wife ELIZABETH all my lands a grist mill together with the appertenances and emolumnets appertaining to the same also all my stock of horses cattle hogs sheep &c. together with all my household and kitchen furniture also all my plantation utensils in during of her natural life and after her decease for my well beloved son MOSES COCKRAM to have my grist mill with full priviledge to get timber any where on my lands to keep the same in repair until WILLIAM ANDERSON COCKRAM son of my son JAMES COCKRAM dec'd shall come of age or to the age of twenty one years old at which time my son MOSES COCKRAM right to sd. grist mill shall cease and all the tract of land together with the grist mill on which I now live supposed to contained two hundred acres be the same more or less to be enjoyed by him the said WILLIAM ANDERSON COCKRAM forever, but with this reserve that my son MOSES COCKRAM shall have the priviledge of holding the above named tract of lands after his mothers decease until the above named WILLIAM ANDERSON COCKRAM shall come of [age] but the sd. MOSES COCKRAM JUN. shall not be allowed to commit any waste by cutting more than is necessary for keeping the said plantation in good repair,

Lastly I do hereby constitute and appoint my son MOSES COCKRAM JUN. and Catlet SMITH executors to this my last will and testament revoking all former wills by me made in testimony whereof I have hereunto set my hand and affixed my seal this twenty fifth day of February in the year of our Lord one thousand eight hundred and sixteen.

At a Court of Pleas and Quarter-Sessions, begun and held for the County of Surry at the Court-House in Rockford on the 2nd Monday of February 1817

These are therefore to authorise and empower the said MOSES COCKERHAM Executor as aforesaid, to take into his possession, all and singular the goods and chattels, rights and credits of the said deceased, wheresoever in this state to be found; and a true and perfect inventory thereof return on oath to the court aforesaid, within ninety days from the date of these presents; and all the just debts of the deceased to pay as far as said estate will extend or amount to.

Witness JOSEPH WILLIAMS Clerk of our said court, at his office in Rockford the 2nd Monday of February Anno Domini 1817 and in the 41st year of American Independence.