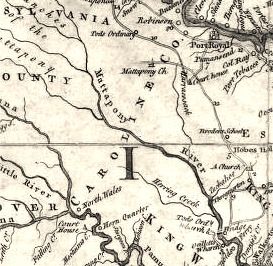 Unfortunately, genealogical research in Caroline County is complicated by the loss of many of the county's records during the Civil War.  The surviving court order books are a primary source of information about the county's inhabitants.  These contain numerous references to members of the Chick family during the 1760's and 1770's, particularly William CHICK and Richard CHICK who were involved in a large number of lawsuits.  There are also couple of references to a James CHICK: he was was being sued by James FENNELL on Mar. 13, 1760/61, by Benjamin HUBBARD on June 15, 1765, and by John MORTON on Sept. 8, 1768.

In 1768, James CHICK and others were fined for refusing to pay tithes and not frequenting their parish church of Drysdale Parish.  (Caroline County Orders 1768-1770, pp.273, 306.)  James CHICK's refusal to pay parish tithes suggests he was a "dissenter," that is, a person opposed to the established Church of England.  He may have been a Baptist.  At the time, the Baptist faith was gaining many converts in Virginia.

James CHICK died before 1780 when his son, John CHICK, made a claim for his bounty land.  The Caroline court order books also contain a reference to Ann CHICK of Caroline County whose last will and testament was proved in court on Jan. 14, 1779; the witnesses were Thomas TARRANT & Ann GUNNEL, and the executor was William Craddock WISDOM.  (Caroline County Orders 1777-1780, p.146.)  Was she the widow of James Chick?  Unfortunately, there is only a brief notation in the court order book concerning the will.  No further information, such as the names of the heirs, is included, and Caroline County's actual wills from this period have not survived.

There are no Chicks or Cheeks listed on the 1783 tax list of Caroline Co., VA, and no further references to the family in the court order books after 1782, except for a lawsuit in 1787 that was assigned to Edward WEST by John CHICK and William CHICK, which suggests they were no longer living in the County.

Nov. 10, 1768. The grand jury of Caroline County issued a "presentment" against James CHICK, Justinian WILLS and several others, for not paying tithes and not frequenting their parish church of Drysdall (Drysdale) Parish.  On March 10, 1769, James CHICK, Justinian WILLS, and John PRUETT failed to appear in court to answer the presentments, and were each fined 500 pounds of tobacco.  (Caroline County Orders 1768-1770, pp.273, 306.)

Note: Justinian WILLS m. Elizabeth CHICK (possibly James Chick's daughter?) on Nov. 22, 1768, Caroline Co., VA.  They moved to Bedford or Campbell Co., VA, around 1771 (they are found in records of both counties).

Mar. 9, 1780. "On proof being made to the Court that James CHICK served as a Soldier till properly discharged in 1758, in a Regiment raised for immediate defence of this State, not being Militia, and that he had never received his Bound of Land under the King of Great Brittains Proclamation, Ordered the same to be certified to the Register of the Land Office that the said James CHICK is since dead and that the said Bounty of Land is vested in John CHICK, heir at law."  (Caroline County Orders 1777-1780, p.217; see also "Some Colonial and Revolutionary Soldiers as Shown by the Order Books of Caroline County, VA," Virginia Military Records (Gen. Pub. Co., 1983), p.112, originally pub. in William & Mary College Quarterly, 2nd Series, Vol. XII (1932), pp.221-228).  The bounty land warrant itself is dated Feb. 1780; Cert. #864; James RUSSLE is marked out and James CHICK written in; "served as soldier till properly discharged in 1760 in a Regiment raised for the immediate defense of the State not being Militia … said bounty of lands is now vested in Jno. CHICK heir at law"; assigned to John GAYLE, Jr., Mar. 11, 1780, signed by John (X) CHICK; wit. Matthew GAULE, Secton ACREE.  (Magazine of Virginia Genealogy, Vol. 31, No. 4 (Nov. 1, 1993), p.282.)

Not much is known about the Chick family who lived in Halifax County, VA, from 1771 through the early 1800's.  According to some sources, Agnes DYER, daughter of John DYER of Halifax Co., VA, married a man named James CHICK abt. 1768.  It is possible, though speculative, that he might have been a son of James Chick of Caroline Co., VA.  John DYER was reportedly from Caroline Co., VA.  John Dyer moved to Halifax Co., VA, by 1755 when he patented 400 acres of land on Childrey Creek.  In his 1771 will, John Dyer left a piece of land to be equally divided between "Agnes, Anes and William CHICK", presumably his grandchildren (or perhaps his daugher Agnes and her two children).  (Halifax WB 1, p.62; dated Apr. 9, 1771, recorded Mar. 17, 1774.)  Agnes' husband James CHICK reportedly died before Apr. 18, 1782, when she married James DALTON in Pittsylvania Co., VA.

It's possible that John Dyer of Caroline and Halifax Co., VA, was related to the Dyers of Essex Co., VA, in which case the Cheek-Dyer connection seems to have lasted for a couple of generations.  William CHICK (grandson of John DYER) lived on Childrey Creek in Halifax County during the 1780's and 1790's, and he appears on Halifax County tax lists from 1782-1791.  There are also a few records of a John CHEEK and a Richard CHICK in Halifax County during the same time period: John CHEEK appears on a Halifax tax list in 1782, and Richard CHICK is on the Halifax tax lists in 1784 and 1791.  In addition, a deed dated Oct. 26, 1795, from Elizabeth Burch GRAY and Nancy GRAY to Tommey LANE refers to land on Terrible Creek, Bradleys Creek, and Spider Creek in Halifax County adjoining Richard CHICK and others. (Halifax DB 16, p.432.)  Spider Creek was an upper branch of Childrey Creek, so Richard Chick apparently lived near William Chick.  There is also a Judith CHICK who married William NANCE in Halifax County on Feb. 2, 1805, and a James CHICK who served as bondsman five years later when William NANCE married Delilah HANCOCK on Dec. 10, 1810.  (Halifax Marriage Bonds.)  Land records indicate that the Hancock family also lived in the Childrey Creek area and were associated with the Chick family (e.g., William Chick purchased 128 acres on Childrey Creek from Thomas Hancock on May 23, 1796; Halifax DB 16, p.660.)