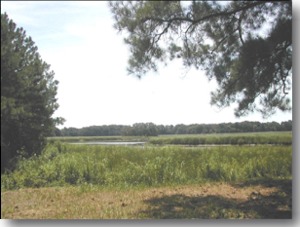 ohn Cheek, Jr., was probably born in sometime in the late 1600's.  A rough estimate is between 1680-1690.  His name does not appear on the 1704 "quit rent" roll of Essex County, which suggests he did not own land in 1704, although the roll is also known to be incomplete.  Many people obviously tried to stay off the quit rent rolls to avoid paying taxes.

John Cheek's (presumed) father, John Sr., appears to have died between 1699 and 1709.  John Jr. must have obtained land prior to 1714 when he sold 100 acres in South Farnham Parish to Erasmus ALLEN.  In all, several different deeds from Essex County indicate that John Cheek owned land in the vicinity of Gilson's Creek (now called Mount Landing Creek), Hoskin's Creek, and Piscataway Creek, all of which are near the town of Tappahannock, Virginia.

During the 1740's, John Cheek and his family appear to have moved from Essex County to neighboring King & Queen County, where they settled in Drysdale Parish, in the upper part of the county.  Most of the records from King & Queen County were burned during the Civil War, but the presence of John Cheek and his family is documented by a merchant's account book and a few other records.

The name of John's wife, Sina, comes from a land deed from Essex County, VA, dated Mar. 6, 1714/15, where it is spelled phonetically "Sinor".  In some British dialects, people pronounce an "r" at the end of words ending in "a" -- for example, they may talk about the death of "Princess Dianer."  This characteristic can also be heard in places like Appalachia and especially Boston, where people say things like "I have an idear" instead of "idea."  In old census records from North Carolina, I have seen names spelled phoenetically in very interesting ways, such as "Louzanner" (Louisiana), "Oriller" (Aurelia), and "Macajer" (Micajah).

The name "Sina" was probably short for a name ending in "-sine" such as Thomasine.   Some sources identify her as Sinor DYER.  This does not appear to be documented, although it is true that the Cheeks were neighbors of the Dyer family in Essex County.