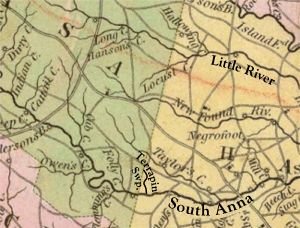 illiam Chick arrived in Hanover County, Virginia, in 1786, when he purchased 342 acres on Terapin Road from James & Elizabeth SIMS.  The deed describes him as "William Chick of James City County."  According to tax lists, William Chick was indeed living in James City County from 1784 to 1787 where he worked as an overseer for the wealthy landowner John AMBLER.

Although William's parents have not been identified, it's possible that he was a grandson of John Cheek, Jr., of Essex and King & Queen County, VA.  Unfortunately, there are no surviving wills, deeds, or other records that could establish a connection.  However, DNA tests conducted in 2007 through the Cheek/Chick DNA Project provides strong evidence that William Chick and John Cheek, Jr., were closely related.  DNA taken from a descendant of William Chick was compared to DNA from several individuals with the Cheek surname who are believed to be descendants of John Cheek, Jr.  The DNA was virtually a perfect match.

Many of the counties in Virginia's Tidewater region, including Caroline and King & Queen, suffered tremendous loss of records during the Civil War.  As a result, trying to identify William Chick's parents is a frustrating and possibly fruitless task.  It almost seems like he appeared out of nowhere.  He wasn't wealthy, but he married into one of the most prominent families in Hanover County.  He worked for John Ambler, one of the richest men in Virginia.  Where on earth did William Chick come from?  Some of the possibilities:

Whatever his mysterious origin, William Chick must have been living in the vicinity of Hanover County, VA, when married Jane RAGLAND in the 1770's.  The Raglands were an old and prominent Hanover County family.  John Ragland, Pettus Ragland's father, settled on Mechumps Creek near the mouth of the Chickahominy River in 1723 and eventually acquired more than 15,000 acres of land.  (See B.F. Johnson, Makers of America Vol. 1 (1915), p.576.)  Pettus Ragland's 1806 will mentions a daughter, "Jane wife of Mr. Chick."  (See William Cocke, Hanover County Chancery Wills & Notes, p.117.)  Unfortunately, there is no record of William Chick in Hanover County prior to his first purchase of land there in 1786.  There was a John Chick "of Hanover County" who purchased 100 acres in Spotsylvania Co., VA, from James & Agnes WARE on May 7, 1770 (Spots. Co., VA, Deed Book G, 1766-1771), but his relationship to William Chick is unknown.

The birth of Burwell CHEEK, son of William CHEEK and "Jeanie RAGLIN," on Jan. 15, 1776, was recorded by the Rev. William Douglas, the minister of St. James Northam Parish in neighboring Goochland County.  (See The Douglas Register: Being a Detailed Register of Births, Marriages and Deaths, Together with Other Interesting Notes, As Kept by the Rev. William Douglas, from 1750 to 1797 (Gen. Pub. Co., 1928).)  Although the Rev. Douglas' church was in Goochland County, he moved to Louisa County in 1777 and he baptised and married many people from surrounding counties as well.

The Biographical Cyclopedia of Kentucky by John M. Greshan (orig. pub. 1896), p.158, in an article on Seyon Ambler BASS of Butler Co., KY, provides the following information about William Chick and his son Ambler:

"Ambler CHICK (maternal grandfather [of Seyon Ambler BASS]) was born in Virginia in 1795.  He removed to Tennessee as early as 1820, where he owned a plantation … In 1852 he removed to Logan County, Kentucky … He married Mary RAGLAND (also the name of the wife of the grandfather, Seyon BASS, but probably not related), who was born and educated in Virginia. … William CHICK (maternal great-grandfather) and Mary RAGLAND (still another of the same name) were natives of of Wales, who emigrated to America and settled in Virginia, but the date of their coming as not been recorded."

The above biographical note is not completely accurate.  Actually, there is no evidence that William Chick or his wife Jane Ragland were natives of Wales.  However, the Raglands of Virginia were descendants of a Welsh immigrant.  This could explain why Ambler Chick's grandchildren believed they had Welsh ancestry, although they mixed up the details.  It also explains the name of William Chick's son, Pettus Wales Chick.  Click here for an article about the Ragland family

William Chick seems to have been part of an elite social circle in Hanover County that included the prominent Ragland and Bagby families.  William's son Pettus Chick married Mary Ann Bagby, a granddaughter of John Bagby who came to Louisa/Hanover Counties from King & Queen County.  Pettus Chick, in his 1854 will, refers to his wife's brother Wiliam J. Bagby as both his brother-in-law and his cousin.  This suggests that Pettus Chick was related to the Bagby family by marriage and by blood.  Although there is no specific evidence, it's possible that William Chick's mother was a Bagby, perhaps a sister of John Bagby, which would mean that Pettus Chick was a first cousin of his wife Mary Ann Bagby and of her brother William J. Bagby.

From 1784-1787, according to tax lists, William Chick worked as the overseer on a plantation in James City owned by John AMBLER, one of the richest men in Virginia.  John Ambler (1762-1836) owned numerous estates and other properties, including plantations in James City County, Surry, Henrico, Louisa, Amherst, and Hanover County, where he had a plantation known "the Cottages."  (See Louise Pecquet du Beller, Some Prominent Virginia Families (orig. pub. 1907, reprint by the Clearfield Co., 1994), pp.35-42.)  He was undoubtedly the namesake of William Chick's son Ambler Chick.

1782. William CHEEK appears on a tax list in Louisa Co., VA. It's likely this was the William CHICK later found in neighboring Hanover Co., VA.

1784-1787. William CHICK appears on tax lists in James City Co., VA, living in the household of John AMBLER. According to the tax lists, William Chick was John Ambler's overseer.

Note: The above deed confirms that William Chick of Hanover Co., VA, was the William Chick who was in James City County in 1786, according to tax lists.

1789 Tax List. Hanover Co., VA (land). William CHICK: 342 acres. In addition, Nathan SIMS appears on the same tax list with the notation that 206 acres of his land had been "conveyed to Wm. CHICK." This is consistent with the deeds referenced above.

1820 census. William CHICK is not listed in the 1820 census, and had probably died by that time. He did not leave a will.

Wife And Children Of William Chick

As discussed above, William Chick of Hanover Co., VA, probably married Jane RAGLAND, daughter of Pettus RAGLAND and Elizabeth DAVIS of Hanover County.  This is based on the will of Pettus Ragland (dated Dec. 1, 1806, proved Jan. 28, 1807, in Hanover Co., VA), which refers to a daughter Jane, "wife of Mr. Chick."

The names of William Chick's children also reflect his close relationship to Pettus Ragland.  Pettus W. Chick and Davis S. Chick may be named after their maternal grandparents, Pettus RAGLAND and Elizabeth DAVIS.  In addition, John R. Chick and Nancy Bluford Chick could be named after their great-grandparents (Pettus Ragland's parents), John RAGLAND and Ann BEAUFORT (or Burfort, perhaps altered to Bluford).  "Nancy" is an old nickname for "Ann."

Finally, Elizabeth DAVIS' mother was a SHELTON, which might explain the name Patsy "Selden" Chick.  The Shelton name seems to have been preserved in the Ragland family: Pettus Ragland had a grandson named Shelton Ragland.  Another possibility, however, is that both Patsy Selden Chick and her brother, William Miles Chick, were named after a famous Revolutionary War figure, Rev. Miles Selden of Henrico County, known as the "Patriot Parson."  It's also possible that Davis S. Chick's middle name was Shelton.