Note: Edwin THACKER's land patent, dated Apr. 20, 1687, describes 1,563 acres of land on the south side of the Rappahannock River between the main swamp of Piscataway Creek and the main swamp of Hoskins Creek, but touching nor abutting neither, adj. the Rowling Path, Mr. Henry AWBERY, VAUGHAN, James TAYLER, Jno. EVANS, & John MEDOR. (VA Land Office Patents, No. 7, p.564.) This is immediately south of the town of Tappahannock, VA.  View a Google map.  The statement "part of 1,563 acres" in the deed from John CHEEK to Erasmus ALLEN simply means that John CHEEK's 100 acres was part of Edwin THACKER's original 1,563 patent; it doesn't mean that John CHEEK owned the entire 1,563 acres. On the contrary, Edwin THACKER seems to have divided up this land into several smaller pieces. He sold 200 acres to Andrew & John WAGONER on Sept. 1, 1690 (Essex DB 8, pp.239-240); another 200 acres went to James TAYLOR (Essex DB 26, p.28).

Note: The colonists in Virginia often used tobacco as a form of currency.

Note: Ten years later, two of the names mentioned in the above deeds also appear in a court record in Essex Co., VA, dated Aug. 22, 1728, in the case of Richard CHEEK vs. John EVANS. CHEEK paid William JOHNSON, Gentleman, for three days attendance and travel from Spotsylvania (55 miles), John DYER from Essex (20 miles), and John EVANS from King and Queen (27 miles). Judgment was entered in CHEEK's favor. 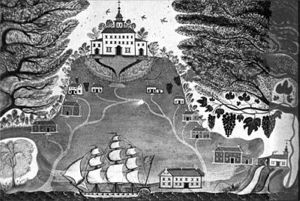 John Cheek and his family left Essex County sometime between 1741 and 1744 and moved a few miles west to neighboring King & Queen County. This is based on the following deed recorded in Essex County:

Note: "by turffle and twigg" refers to the ancient legal ritual called livery of seisen

, in which the seller symbolically conveyed the land to the buyer by handing him a clump of earth and twigs.

1749-1752: The Noonian Boog Registers. Virtually all the official records from King & Queen County were destroyed when the courthouse was burned during the Civil War. Fortunately, researcher Larry Cates discovered evidence of the Cheeks in one of the few surviving documents, an account book kept by a merchant with the unlikely name of Ninian BOOG. Mr. Boog managed a mercantile store on the Mattaponi River for the firm of Buchanan & Hamilton out of Liverpool, England. Goods were delivered at Norfolk and shipped upriver by sloop. The store served the central and upper portions of the County and was convenient to purchasers in both Drysdale and St. Stephen's Parishes. There are three extant registers, a daybook and indications of a fourth register and all are preserved at the Virginia State Library in the business records collection, Accession No. 28893. They are partly abstracted in The Magazine of Virginia Genealogy, Vols. 28 & 29 (1990-1991).

John's sons (John Jr., Richard, Robert, William) have been deduced from the above account book.

Another reference to John CHEEK, Jr. -- presumably the son of the elder John Cheek Jr. (now Sr.) then living in King & Queen County -- appears in the 1745 will of Henry PAGETT of Essex County, as follows:

1750's & later.  John Cheek's (presumed) son Richard Cheek (Chick) lived on "Tuckahoe Swamp" in King & Queen County, according to a 1758 land patent granted to his neighbor John WATKINS (VA Patent Book No. 33, p.459), which describes a tract of land adjoining Richard CHICK.  There are also numerous references to a CHICK family in the court order books of Caroline County during the 1760's and early 1770's.  It's not known whether this was the same Cheek or Chick family found in King & Queen County, but the first names are similar, including William Chick, Richard Chick, and James Chick.  Moreover, James and William Chick must have lived very close to the Caroline-King & Queen County line because they were still in Drysdale Parish.  Only a small part of Drysdale Parish overlapped into southern Caroline County; most of the Parish was in King & Queen County.  On Nov. 10, 1768, the grand jury of Caroline County issued a presentment against James Chick for failing to pay tithes to Drysdale Parish.  There is a deed from 1763 in Halifax Co. which identifies William Chick as "William Chick of Caroline County and Parish of Drisdale" (Halifax DB 5, p.16).  Finally, Richard Chick also lived in southern Caroline County based on a road order dated June 13, 1765, where he was made overseer of Burkes Bridge Road by Capt. DIXON's plantation to the White Marsh Run.  Burkes Bridge Road crosses the Mattaponi River a little north of Reedy Mill, about 15 miles upriver from Tuckahoe Creek.  There was also an Ann CHICK whose will was recorded in Caroline County on Jan. 14, 1779.  (Caroline County Orders 1777-1780, p.146.)  She might have been the widow of James Chick, but unfortunately, the actual will has not survived.

A small excerpt of Fry & Jefferson's famous map of Virginia (1751).  Hoskins Creek and Piscataway Creek are shown on the right side of the map near the town of Tappahannock.  Note also Tuckahoe Creek, a branch of the Mattapony River, near the center of the map.  John Cheek's son Richard Cheek owned land in the vicinity of "Tuckahoe Swamp", according to a land patent granted to John Watkins in 1758 (VA Patent Book No. 33, p.459).  Tuckahoe Creek/Swamp is now Chapel Creek.  Click here to view Fry & Jefferson's map at the Library of Congress website