John Edwards and his family arrived in Orange County, North Carolina, by 1757, perhaps from Granville County, although that's not certain.  Records indicate that John Edwards acquired several hundred acres of land on Marks Creek, Morgan Creek, Collins Creek, and Ellerbe Creek.  This places him in the upper New Hope Creek

area of Orange County, near the present-day cities of Chapel Hill, Carrboro and Durham, North Carolina. 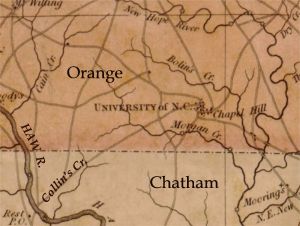 [The following information was updated 12/17/11] Bolin Creek and Morgan Creek are both shown on the map at left, from 1833 (Collins Creek is written in).  "Marks Creek" cannot be found on maps but researcher Dan Griffin has discovered that the name probably refers to Morgan Creek (I previously thought it might be an early name for Bolin Creek).  Clues to the location of Marks Creek come from Henry Mouzon's map of North Carolina (1775) shows "T. LOYDE" and a "J. PATTERSON" on the upper branches of New Hope Creek on the road leading south from Hillsborough.  Thomas Lloyd was a British loyalist and prominent figure in the early history of Orange County.  He obtained a land grant on Marks Creek in 1757.  His plantation, "the Meadows," was near the present-day town of Calvander, formerly called Faucette, which is located about 5 miles west of Chapel Hill, between Morgan Creek and Bolin Creek.  James Patterson had a tavern at the crossroads on New Hope Chapel Hill, just north of Bolin Creek.  He was probably related to John Patterson who obtained a land grant on Marks Creek in 1758.

On Aug. 1, 1792, the Trustees of the University of North Carolina voted to select a location for the new university within a 15-mile radius of Cyprett's Bridge over New Hope Creek.  A group of Commissioners were appointed to visit all places deemed eligible for the site of the university.  The Commissioners' journal records that on Nov. 4, 1792, they "proceeded to Captain EDWARDS' and the widow EDWARDS' places, on the north side of Haw River, and received proposals."  The Edwards' proposal was not accepted, and the Trustees eventually accepted a donation of 1,290 acres from a group of landowners on Chapel Hill.  (See History of the University of North Carolina

by K.P. Battle, Vol. I (1907), p.22.)  This record, however, gives a general indication of where the Edwards family lived.  The precise location Cyprett's or Cipritz Bridge is unknown, but university history scholars believe that it spanned a section of New Hope Creek that now forms part of the Jordan Lake Reservoir (the Jordan Dam was constructed in the early 1970's, flooding a large part of the New Hope Creek valley).  "Capt. Edwards" may have been John Edwards Sr. or Jr. (both were alive in 1792), or perhaps it refers to lands belonging to the deceased Tory, Capt. Richard Edwards.  The "Widow Edwards" might have been the widow of one of the Edwards who died in the Revolutionary War—if not Richard, then possibly David, Edward, Sylvanus or William.

Interestingly, there is an Edwards Mountain in Chatham County, NC, just west of Jordan Lake, and less than 5 miles south of the University of North Carolina campus at Chapel Hill.  Presumably, at one time there must have been Edwards living on Edwards Mountain.  It is now home to an exclusive golf course and multi-million-dollar homes.

Note: of the Edwards who appear on the 1766 tax list, we know from John Sr.'s will (see below) that John Jr., David, and Sylvanus were definitely his sons; Young was his grandson, the son of John EDWARDS, Jr. ; Edward and Richard were probably his sons; Hugh EDWARDS is unknown.

Aug. 1782. Orange Co., NC. Letters for the administration of the estate of Nathaniel EDWARDS were presented to Margaret EDWARDS (wife) in Bond with John EDWARDS in sum £200. (Orange Co., NC, Court Records.)

June 14, 1785. Orange Co., NC. A deed for a slave from John EDWARDS to "friend Margaret EDWARDS at her death to her son Henry EDWARDS." Wits: John DURRAM [DURHAM], Sarah DURRAM.(Orange Co., NC, Will Book A, p.367.)  [Note, this may have been a gift from either John EDWARDS Sr. or Jr. to Margaret, widow of Nathaniel EDWARDS.]