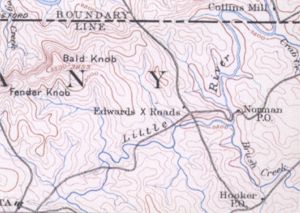 illiam Edwards and his family arrived in Ashe County, NC, sometime prior to 1800.  They settled on the Little River and Jewel Swamp Creek, which was a part of Ashe County that became Alleghany County in 1859.  The large and extended Edwards family were very numerous in this part of Alleghany County, and the principal community in the area eventually became known as Edwards Crossroads.

Some important information about Wiliam Edwards comes from an affidavit dated Mar. 24, 1892, prepared by his daughters Sarah (EDWARDS) CHOATE, Nancy (EDWARDS) FENDER, and Jane (EDWARDS) DUNCAN, and recorded in Alleghany Deed Book 33, pp.524-525.  In the affidavit, the three women state that "their fathers name was William EDWARDS and was born in Orange County, North Carolina, October 15th, 1776, and that his wife's maiden name was Nancy CARTER."  They further state that William's children, along with themselves, were "Thomas EDWARDS, Nathaniel EDWARDS, David EDWARDS, Johnathan EDWARDS, Joshua EDWARDS."  See entire affidavit below.

According to Alleghany County Cemeteries Through 1986 (pub. by the Alleghany County Hist.-Gen. Society), William and Nancy (Carter) EDWARDS are buried at the Brooks Cemetery, Road 1426 in Alleghany Co., NC.  However, the dates on the gravestones, at least as reported in the cemetery book (William 1745-1830 and Nancy 1750-1835), are cleary erroneous.  Also, the gravestones are reportedly transcribed with the words "born in England" which is probably not correct.  It is possible the stones were erected by descendants who had inaccurate information.

Nov. 1806. Wm. EDWARDS & others ordered to view and lay off a road "from HAPPERSON's [HOPPPERS?] road between little river and Glad [Glade] creek the most convenient way by MAXWELL's Mill into the road from Elk Spur to the furnace & make report &c." (Ashe County, NC, Court Minutes.)

May 1807. William EDWARDS & others ordered to view and lay off a road from Richard WILLIAMS to Joseph DAMSONS. (Ashe Co., NC, Court Minutes.)

Geographic note: Alleghany County was formed from Ashe County in 1859.

The following document contains some extremely important genealogical information about the family of William Edwards (1776-1869) of Ashe/Alleghany Co., NC. However, it also contains a major inaccuracy that is undoubtedly related to the famous legend of the "Edwards Fortune."  During the 19th century, many families named Edwards were duped by con artists who gave them fraudulent family trees showing their alleged relationship to an individual named Robert Edwards of New York, whose heirs were supposedly the rightful owners of 77 acres of land in New York City.  As suggested by the correction later entered in the margin of the deed book, the father of William Edwards (1776-1769) is believed to be David Edwards, Sr., of Orange Co., NC, not a "William Edwards" who was the brother of a Robert Edwards who "returned to England" and had property "in the state of New York on in the vicinity therof."  More about the Edwards fortune.

This day Sarah CHOATE and Nancy FENDER and Jane E. DUNCAN comes before me and each in one form of law makes oath. Mrs. CHOATE that she was born January 13th, 1809, Mrs. FENDER 16th of April 1815, Mrs. DUNCAN, September 4th, 1817, in North Carolina.

That the brothers and sisters names of affiants were Thomas EDWARDS, Nathaniel EDWARDS, David EDWARDS, Johnathan EDWARDS, Joshua EDWARDS, and the three affiants. That after the death of their said grandfather his widow then married Richard WILLIAMS and Sarah CHOAT makes oath than when she was a child or little girl she often heard the lessee of the property of Robert EDWARDS, the brother of her grandfather, speak of and that he leased it, or in some way left it, and returned to England, and soon after he thus returned to England that he died: and that the said property of said Robert EDWARDS, was in the state of New York on in the vicinity therof.