in Grayson Co., VA, located just north of the North Carolina state line between State Route 629 and a loop of the New River.

avid Cox and his brothers John, Richard, and Joshua, and brother-in-law John CRAIG, left Lancaster County, Pennsylvania, in about 1756 and spent the next several years on the Virginia frontier as soldiers in the French & Indian War.  David Cox settled in the upper New River Valley region of southwest Virginia by 1765, then then part of Botetourt County.  This area became Fincastle County in 1772, Montgomery County in 1777, Wythe County in 1790, and Grayson County in 1793.

John Cox, Sr., John Cox, Jr., David Cox, and John Craig appear on a list of men from Fincastle County, VA, who were compensated for their service in Lord Dunmore's War in 1774.  Lord Dunmore's war was a period of hostility between European settlers and the Shawnee Indian tribe in the upper New River Valley.  A few years later, during the Revolutionary War, David Cox served in his brother Capt. John Cox's Company.  His name appears on the Oath of Allegience signed by the members of Capt. John Cox's company on Sept. 30, 1777, and filed with the court in Montgomery County, VA.  See Virginia Military Records (Gen. Pub. Co., 1983), p.215. 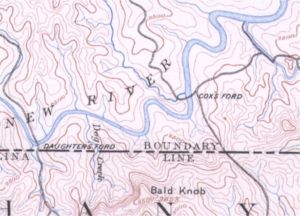 According to B.F. Nuckulls, Pioneer Settlers of Grayson County, Virginia

(1914), Ch. IX: "About the year, 1740, David COX and John COX, two brothers, came from Scotland to Virginia.  They both located in what is now Grayson county, on New River, about ten miles west of Grayson Old Court House … David COX, brother of Captain John COX, moved his family and located on the river near where his brother first settled, near what is now COX's Ford, ten miles west of Grayson Old C.H. [Court House].  David COX's wife was a Miss MCGOWAN; they had eleven sons and three daughters."

The local historian Dr. Aras B. Cox wrote in Footprints in the Sands of Time

(1900), Ch. V., "David COX, brother of Captain John COX, moved his family to Grayson County and located their home in the same neighborhood where his brother, Captain John COX stopped for several years—on New River, ten or twelve miles west of Grayson Old Court House.  David COX's wife was a Miss MCGOWAN. They had seven sons and three daughters, whose lives were directly connected with other good citizens in laboring for the interest of the county in all the pertained to success, prosperity and future happiness."

(1912), pp.52-53, states that "David COX and his brother, John COX, are said to have come to this country from Scotland in 1740, another tradition says, from Wales; and still another, that they were of Scotch-Irish descent … They settled on New River, in Grayson County, four miles west of Little River.  John COX was Captain of the Home Guard, during the Revolutionary war. After the close of the war he removed to Ashe County, North Carolina where he lived, on the South fork of New River, until his death.  His brother, David, remained with his family, in Virginia, where many of his descendants now live." 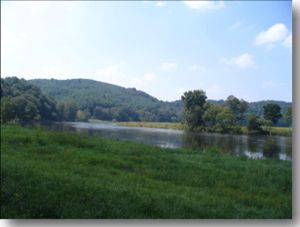 The New River from Route 629
Grayson Co., VA, near the NC line

April 5, 1780. Montgomery Co., VA. The court certifies a list of soldiers who served on the frontiers of Augusta Co., VA, in 1755 and 1756, including John COX, David COX, and Joshua COX. (Kegley's Virginia Frontier, "Service Records from Montgomery County", p.276.)

Aug. 20, 1793. Grayson Co., VA, Land Plat Book. "Surveyed David COX, assignee of John COX assignee of Robert POLLARD by virtue of a Land Treasury Warrant for 1200 acres No. 529 and dated the 25th day of June 1793 enters 200 acres of Land on the South side of New River. Beginning at a white oak at the Mouth of a branch & running down sd. River to include the improvement of Said COX lives for quantity."

1794, Grayson Co., VA. David COX reportedly signed a power of attorney for his nephew to represent him in matters concerning the land of Joshua COX, dec'd, who he refers to as "my father."