ames Cheek, Sr., of South Carolina was probably born in Virginia or North Carolina sometime in the early 1730's.  He was under 14 when his father Richard CHEEK, Sr., of Beaufort Co., NC, wrote his will in 1743, so he could not have been born earlier than 1730.  But he probably reached the age of majority (20 years old) by 1755 when he sold property in Edgecombe County, NC.  This means he was born no later than 1735.

According to a 1773 deed, James Cheek' wife was named Ann.  The will of William MAYO of Beaufort County, NC, dated Aug. 27, 1759, mentions a daughter, "Anne Cheek."  (Beaufort Co., NC, WB B, p.67.)  Some researchers believe that she was James Cheek's wife, although other sources say Ann MAYO married James's brother, Richard Cheek Jr.

James Cheek moved to Orange Co., NC, by 1758, and obtained a land grant for 409 acres on both sides of the north fork of the Little River.  He was a Quaker and a member of the Cane Creek Monthly Meeting.  Between 1761 and 1764, he sold all his land in Orange County and relocated to the South Carolina "upcountry".  In 1765, he was granted 550 acres on Beaverdam Creek and the Saluda River in "Old" Berkeley County, SC.  This was probably the Beaverdam Creek located in the part of Old Berkeley County that later became Newberry District.  There was a large Quaker community in this area, centered around Bush River.  In later years, James Cheek and his family moved farther up the Saluda River into Laurens District where some of the family settled on another Beaverdam Creek near the present-day town of Grey Court.

The above timeline is confirmed by a Revolutionary War pension application filed by Ellis Cheek, believed to be James' son.  Ellis Cheek testified that he was born in Orange County, NC; was living in Fair Forest River, SC (now Union or Spartanburg County) when the war began; enlisted in 1780 and again in 1781; and moved to Laurens District, SC, before the conclusion of the war [which ended in 1783].  In 1781, Ellis was disowned by the Quakers at the Bush River Monthly Meeting in Newberry Dist., SC, for "taking up arms in a warlike manner."  (Ency. of American Quaker Genealogy, Vol. 1.)

James Cheek appears to have died prior to 1790 when his wife Ann CHICKE is listed as a head of household in the census of Laurens District.  His will, if he had one, has not survived.  His children have been identified mainly by geographic proximity.

18th Century Landowners in Orange Co., NC
from a map by Nancy Brister 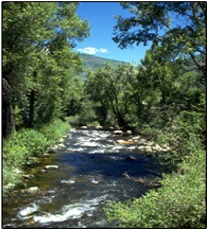 Geographical Note: Land records indicate that James Cheek settled in Old Berkeley County, South Carolina.  "Old" Berkeley County should not be confused with present-day Berkeley County.  Old Berkeley County was one of the four original "royal counties" of South Carolina.  The other royal counties were Craven, Colleton, and Granville.  In 1769, these four counties were divided into several large districts.  The northwestern part of South Carolina became the "Ninety-Six District," named after a British fort believed to be 96 miles south of the Cherokee village of Keowee.  In 1785, the 96 District was divided into six smaller districts: Spartanburg, Union, Laurens, Newberry, Abbeville, and Edgefield.  However, the 96 District continued to exist as a political entity until around 1798.  In addition, for many years the inhabitants of the 96 District continued to file legal documents in Charleston, the capital of Old Berkeley County.  It can be challenging to figure out where early settlers in South Carolina actually lived.  (More info about the formation of SC counties

Note: this was probably the Beaverdam Creek in present-day Newberry Co., SC, near the Bush River Quaker community.

1768. Petition by inhabitants residing in forks of Broad and Saludy Rivers, Bush Creek, Rayburns Creek, and parts adjacent, for road from Orangeburgh to Saludy and Bushes and Rayburns Creek; they ask that James CHEEK and others be appointed as road commissioners. (Citizens and Immigrants: South Carolina 1768 by Mary B. Warren, p.98.)

Note: This may be the first record of the Cheek family in the Laurens District.  The plat map shows land belonging to James Cheek located next to William Eslar's parcel along what appears to be a branch, possibly "Rabins Branch" (Rabon Creek).  James Cheek's name appears on the map but the text description of the parcel also refers to land belonging to William Cheek.  William Eslar obtained another plat on the same date, Mar. 13, 1773, for 200 acres in Old Craven County on Reedy River adj. James REYAN [RYAN] and John BAW [BAUGH].  The Reedy River joins the Saluda River in what is now Laurens Co., SC.  Part of the area that became Laurens was in Old Craven County's jurisdiction; the other part was in Old Berkeley County.  Other records show that John BAUGH's land was located on Reedy River in Old Berkeley County.  All these records, taken together, are evidence that William Eslar's plat which mentions William Cheek and James Cheek was for land located in Laurens Dist.

There are no further records of James Cheek after 1773, unless he was the James Cheek in Old Tryon/Rutherford Co., NC, from 1774-1782 (see discussion below).  Ann was apparently a widow by 1790 when she appears in the census of Laurens Dist., SC, along with sons William, Ellis, and Willis Cheek.

The deeds and land grants involving James Cheek from 1765-1773 describe land on Beaverdam Branch or Beaverdam Creek of the Saluda River.  One grant also mentions the fork of the Saluda and Broad Rivers.  This puts the Cheek family in what is now Newberry District, where there was a large Quaker community centered around Bush River (right-hand map, above).  By the 1780's, however, the Cheek family had relocated several miles upriver to the northwest.  The Revolutionary War veteran Ellis Cheek (whose gravestone proves he was a son of James and Ann Cheek) testified in his pension application that he was living in Fair Forest River (now Union or Spartanburg District) when the war started (i.e., 1776) and moved to Laurens District before the conclusion of the war (i.e., before 1783).  Some of the later Cheeks in Laurens District lived around the town of Gray Court, which is located on a different Beaverdam Creek, a branch of the Enoree River (identified as Beaver Creek on the left hand map, above).  View a Google map.

Curiously, no Cheeks are listed on the 1779 census of the Ninety-Six District, which included the entire geographic area that James Cheek and his family might have been living in 1779, including the areas that became Newberry, Edgefield, Union, Spartanburg, and Laurens Districts.  Either James Cheek was omitted from the census by mistake, he was deceased and his family was living in another household, or they left the area after 1773.

Interestingly, there is a James Cheek who purchased 600 acres of land in Old Tryon County, NC, on July 5, 1774.  (Old Tryon Court Records.)  Old Tryon County, which was abolished in 1779, originally encompassed all of present-day Rutherford and Lincoln Counties in North Carolina as well as York, Chester, Union, Spartanburg, and Cherokee Counties in South Carolina.  According to a road order entered in Old Tryon County in Oct. 1776, James Cheek probably lived near the NC-SC state line between what is now Rutherford Co., NC, and Spartanburg Co., SC.  A jury was appointed "to lay out a Road from Wm. Gilbert's the nearest & Best way to James CHEEK's on the South Carolina line so as to Cross at Twitty's Ford on Broad River".  "William Gilbert's" probably refers to the village of Gilbert Town, located on the Second Broad River (the north fork of Broad River) in what is now central Rutherford County.  Twitty's Ford on the Broad River was in Rutherford Co. about 8 miles from Gilbert Town.  Although far off the beaten track, this area became the center of a nasty guerilla war during the Revolution.  James Cheek, along with three children (names not given) are listed as killed or wounded by Indians in Rutherford Co., NC, in May 1782.  (NC Gen. Society Journal, 9:236, Nov. 1983.)

It's not known whether this is the same James Cheek who was living in the Bush River Quaker community from 1765-1773.  However, the dates are consistent: James Cheek sold his land in the Bush River community in Feb. 1773.  He and William Cheek appear the following month (Mar. 1773) in a land plat issued to William Eslar on the Saluda River in Old Craven County.  Based on other records, this land was probably located around the Reedy River in what later became Laurens District.  But then James Cheek disappears from the records of the Ninety-Six District.  Meanwhile, his son Ellis Cheek was living in "Fair Forest River" at the start of the Revolutionary War.  The headwaters of Fairforest Creek (near the town of Spartanburg, SC) are less than 20 miles from Rutherford Co., NC.  None of the Cheeks are listed in the 1779 census of the Ninety-Six District, so it is plausible they were all living across the state line in North Carolina that year.  Ellis Cheek was disowned by the Bush River Quakers in 1781 for taking up arms.  James Cheek of Rutherford Co., NC, was killed or injured by Indians in 1782.  Ellis Cheek moved to Laurens Dist., SC, before 1783 where his brother William Cheek obtained a land grant in 1785.  Ellis, William, and Willis Cheek and their mother Ann (apparently a widow by that time) are listed in the 1790 census of Laurens Dist., SC.