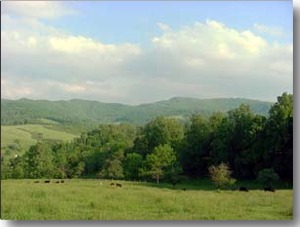 lexander Richardson and Martha Cheek probably married around 1834, based on the ages of their children.  They lived near Martha's parents, Richard & Jennie Cheek, on the Little River and Crab Creek in the northeastern corner of the county.  This part of Ashe County became Alleghany County in 1859.

Alexander Richardson was born in 1805 in North Carolina, according to census records, but his parents have never been identified.  There are two Richardsons listed on the 1800 census of Ashe County, NC: Canada Richardson and James Richardson.  It is possible that Canada and James were brothers.  Canada Richardson (1768-1863) and his wife Jane COX (daughter of Capt. John COX) lived on the north side of the South Fork of the New River, which remained part of Ashe County after Alleghany County was formed in 1859.  James Richardson (c.1771-bef.1860) and his wife Ruth (last name unknown) lived on Kings Creek on the south side of the South Fork of the New River in what later became Alleghany County.  Canada Richardson's children seem to be fairly well documented and do not include a son named Alexander.  However, James Richardson had 12 children and only a few have been identified.  The 1830 census shows several children in James Richardson, Sr.'s household, including a son age 20-29 (so born between 1800-1810) who could be Alexander (at least he is the right age).

Unfortunately, many researchers have run into brick walls with Alexander.  There were several other Richardson families in Grayson, Wilkes and Surry Counties, and Alexander might be related to any of them.  Alexander did not live particularly close to James Richardson (in fact they were on opposite sides of Alleghany County).  Of course, Alexander might have moved to be nearer his wife's family, but this is somewhat speculative.  Further research into the Ashe County records, particularly land and estate records concerning the various Richardson families, might provide additional information.

Mar. 16, 1889. Inventory of the estate of Alexander Richardson, who died intestate, was filed in the court of Alleghany County. (NC Archives No. CR.004.508.24.) The inventory shows that Alexander had lent quite a bit of money to his family in the years preceding his death, including various sums to his sons William, Eli, Henry, Isom, Isaac, Calloway, and John, and sons-in-law James C. Dickens and Robert Lee Truitt. Debts owed to his estate totalled more than $1,200, which is about $25,000 in 2006 dollars. Alexander Richardson seems to have been a properous farmer who had extra money available to assist his family. He was also frugal: the total claims against the estate came to only $87.33, which included the costs of probate.

May 29, 1875. Lydia JOINES & Alexander RICHARDSON, boundary dispute. "This day being called on to survey the land where Lyda JOINES lives also to establish the corner of the land that Jacob HOPPAS [HOPPERS] sold to Merida RICHARDSON now owned by Alex RICHARDSON.… Jacob HOPPAS states on his oath that … the NE corner was on a Spanish oak near yellow bank ford … SW of WHITEHEAD's Mill House near where WHITEHEAD has today set up a Rock … he also states on his oath that the corner on the maple corner claimed by Alex RICHARDSON he never claimed … Benjamin CROUSE states on his oath that the NE of the land Jacob HOPPAS sold to Merida RICHARDSON was on a Spanish oak SE of Daniel WHITEHEAD's Mill House at or near where WHITEHEAD had this day set up a Rock for a corner and not the corner of Lyda JOIN's land." Subscribed and sworn to in the presence of William HILL, Stephen HOPPAS, Elizabeth JOINES, Alex RICHARDSON, Henry RICHARDSON, Daniel HOPPAS, Jacob JOINES, Joseph WARDIN? & others [not identified]. Signed: Jacob (X) HOPPERS, Benjamin (X) CROUSE. Wit: M.F. JOINES. Reg. June 15, 1875. (Alleghany DB 3:376.)