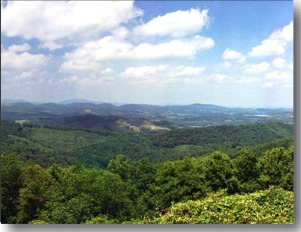 enjamin Crouse and Wady Cheek probably married around 1826, based on the ages of their children.  Benjamin was the son of Adam and Elizabeth CROUSE of Ashe/Alleghany County, also spelled Crows, Crowse, or Krowse.  The Crouses of Alleghany County were a very large and extended family.   They are believed to be the descendants of German settlers named Kraus who came to North Carolina from Pennsylvania in the late 1700's.

Wady Cheek, born in 1807, was the oldest daughter of Richard & Jennie Cheek.  How she got her unusual name is unknown.  "Wady" was sometimes used as a nickname for the Puritan name "Waitstill," which has an old-fashioned feel even in 1807.  The Cheeks must have liked creative names.  In an era when it sometimes seems like every other woman was named Mary or Elizabeth, Richard and his wife called their daughters Wady, Pinkey, and Gilley!

Benjamin first appears in the records of Ashe County in 1824 when he witnessed two deeds involving the heirs of Daniel HOPPERS.  He obtained a land grant in 1838 and is listed in the census from 1840 through 1880.  Wady died in 1865; Benjamin in 1891.  No will or estate files have been located at the NC Archives.  They are buried at the Henderson Crouse Cemetery, located at the Doughton Park Campground, Road 1131, Alleghany Co., NC.  (Alleghany Cemeteries Through 1986, pub. by the Alleghany Co. Hist.-Gen. Society.)

May 29, 1875. Alleghany Co., NC. Benjamin CROUSE was a witness in a boundary dispute between his wife's brother-in-law Alexander RICHARDSON and Lydia JOINES. (Alleghany DB 3:376.)