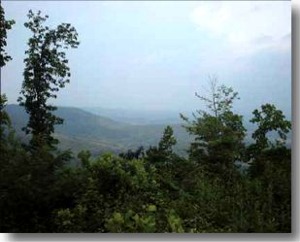 William B. Kennedy is believed to be one of the four sons of Aaron CANADY, Sr., of Wilkes and Surry Counties, NC.  William married Rachel THOMPSON in Surry County, NC, in 1819.  They settled in Roaring Gap, which is a windy pass in the Blue Ridge between Wilkes and Alleghany (formerly Ashe) County.  They had seven children.  Rachel died between 1860 and 1870, based on census records.  William was still alive in 1870 at the age of 72, but he died prior to Sept. 1874 when his will was proved Wilkes County, NC.  His will, which is dated Oct. 5, 1860 (fourteen years before his death) names his wife Rachel, sons Ruffin, William, Thompson, and Norwood, and daughters Sedilia, Mary, and Millia.

There was a long relationship between the Thompson family on Mitchell River the Kennedys who lived on Big Elkin Creek, just across the county line in Wilkes County.  Along with many connections between their extended families, they also lived in close proximity.  In a road order dated February 1826, the Surry County Court appointed a group of men including James THOMPSON, Sr., Elijah THOMPSON, Joseph THOMPSON, Joseph THOMPSON, Jr., William THOMPSON, Sr., Aaron KENNEDY, William KENNEDY, and John KENNEDY to provide hands to cut "the road leading from Jonesville to the intersection of said road with the Main State Road leading to Gap Civil".  Gap Civil is on the other side of the Blue Ridge in what was then Ashe (later Alleghany) County.  This road would have started at the Yadkin River in Surry County and run northwest to the top of the Blue Ridge, following a path between Big Elkin Creek (Wilkes County) to the west, and Mitchell River (Surry County) to the east.  The Kennedys and Thompsons must have lived along the route of this road or they would not have been required to provide labor for its construction.  In later years, there are also records of a "Thompson Gap Road" in Surry County which was apparently located on Mitchell River close to the Ashe County line.  (Alleghany DB 7:357, 7:451, 7:452).

These clues place the Thompson family high in the Blue Ridge Mountains on the upper branches of Mitchell River.  Rachel's parents are believed to be buried at the Thompson Family Cemetery in the town of Devotion, which is on Mitchell River in Surry County not far from Roaring Gap, where William and Rachel Kennedy made their home.

Will of William B. Kennedy

In the name of God Amen. I WILLIAM B. KENNEDY of the County Wilkes in the State of North Carolina being weak in body but of sound and disposing mind and memory do make and publish this my last Will and Testament in the manner and form following to wit

I hereby will and bequeath to each of my children hereafter named and my wife RACHEL KENNEDY equal portions of all and singular my Estate both real and personal to be ascertained by sale of my property and giving each as legatees one share except that the property heretofore given and advanced to my children is to be subtracted from the share of each so as to make all equal including said advancement.

I direct my executor hereafter named after my decease to sell all my property and reasonable credit, to collect all debt due me and pay all my just debts and pay to my wife RACHEL one equal share with all my children.

To RUFFIN KENNEDY one share except that the following advancements be added to the amount of my Estate and be subtracted from the share of each of my children.

To RUFFIN KENNEDY I have advanced Seventy five Dollars.

To my daughter SEDILIA Seventy Dollars.

To my daughter MARY Thirty Dollars.

To my son THOMPSON One Hundred and forty Dollars.

And it is my will that the Advancements made shall be rated at the above figures.

Lastly I hereby appoint my son NORWOOD KENNEDY Executor to this my Last Will and Testament.

In witness whereof I have hereunto set my hand and affixed my seal the 5th day of October in the year of our Lord One Thousand Eight Hundred and Sixty 1860.

Wilkes County - In the Probate Court.
I GEO. H. BROWN Judge of Probate for the County of Wilkes, having examined the foregoing instrument of writing purporting to be the last Will and Testament of WM. B. KENNEDAY and signed by WM. B. KENNEDAY and dated Oct. 5th A.D. 1860 and having heard the testimony of JOSEPH F. GENTRY and HUGH HANKS the subscribing witnesses thereto in relation to the execution of the same who upon their oath each depose and says for himself that the said WM. B. KENNEDAY the testator aforesaid did at the time of subscribing his name at the end of said paper writing declare the same to be his last Will and Testament. And deponents did thereupon subscribe their names to the said will as attesting witnesses at the request & in the presence of the said Testator. And at the time when the said Testator so suscribed his name to the said Will and at the time of deponents subscribing their names thereto as attesting witnesses the said WM. B. KENNEDAY was of sound mind and memory, of full age to execute the Will and was not under any restraint to the knowledge information or belief of deponents. I do therefore judge the Execution of the said Will by the Testator aforesaid to be duly proven. I do further consider adjudge and declare the said paper writing amd every part thereof to be the last Will and Testament of WM. B. KENNEDAY deceased late of Wilkes County. And the same is recorded as such in the record of wills for said County Sept. 5th, 1874.